Around the world there are over 500 species of rays. Related to the shark family these cartilaginous fish are of extreme value to the recreational angler, from both boat and shore. Sadly though, the numbers of rays being landed either commercially or during recreational angling has dwindled vastly over the last couple decades.

According to the Shark Trust there have been 15 species of ray recorded in UK waters, of these only 5 of them are relatively common around the north Wales coast. These are the blonde ray, cuckoo ray, spotted ray, small eyed ray and thornback ray; I have occasionally heard reports of small undulated rays being caught around the Nefyn area, but none of any real size.

The thornback and spotted rays are the most common of all to anglers around north Wales. Anglers are able to target both species all year round, with late November, December and early January the leanest times, however entering February and once well into March the ray fishing really can come alive. Ray fishing is available for anglers of all disciplines charter boat, small boat and shorw. For small boat anglers, there are a number of marks easily available from many launch sites around the Anglesey coast; I would suggest that the fishing grounds immediately off Ty Croes and Cable Bay often giving up the best to those braving the cold conditions of an early morning spring launch. 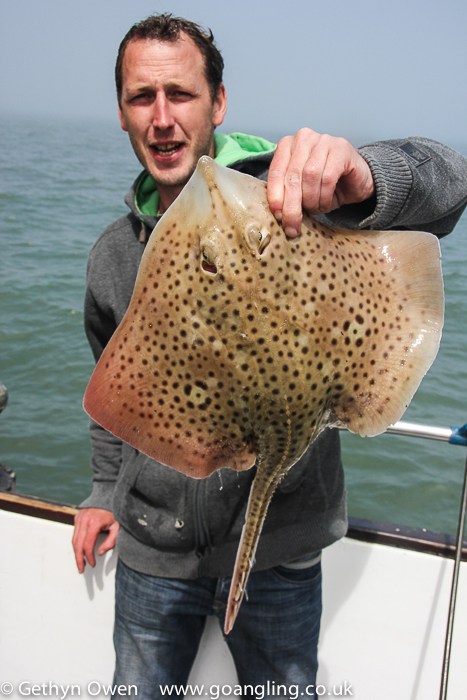 Spotted rays do not grow huge in comparison to thornbacks or blondes, the British record stands at a mere 8lb. The average size we tend to see is between 2 and 3lb, with anything over 3½lb being considered a very good specimen. 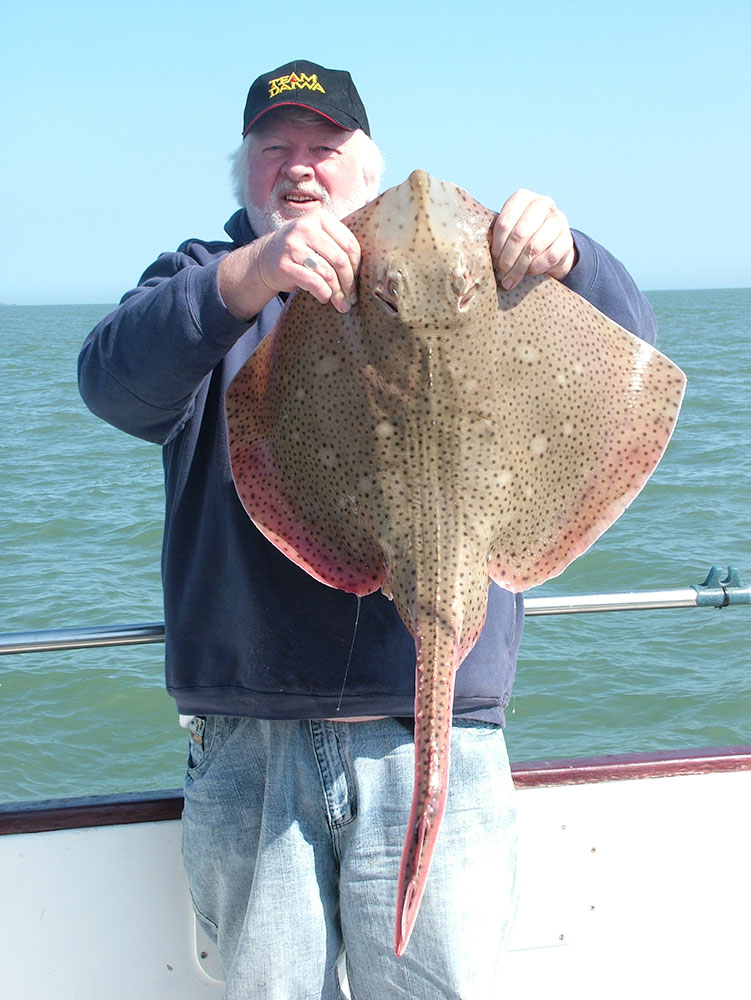 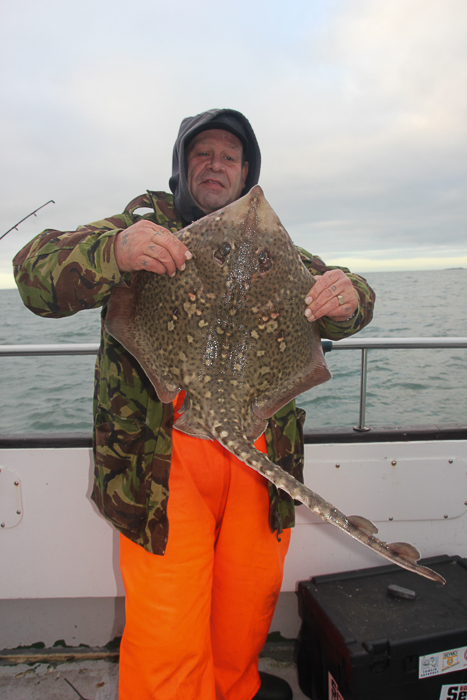 It is fairly easy to identify the spotted ray; they have a small snout and gently curved wing tips, with a white underside they tend to have a darkish golden brown top colour that is covered in small dark spots. These spots tend to stop short of the wing edges by around 2cm – whereas the spots on a blonde ray go all the way to the edge of the wings. On most spotted rays each wing has a slightly light spot surround by a ring of small black spots, this is known as ocellus –a marking that often resembles an eye, as seen on the wings of some butterflies.

Beware when handling a spotted ray as it does have small spines positioned on its top side, easily missed if not aware. They have a small dense row of spines on the edge of each wing, adjacent to the eyes, along with a track of spines leading down the length of the tail. The feeding habitat of a spotted ray diet tends to consist mainly of crustaceans and small shrimps etc. As the ray grows in size they can also enjoy smaller fish such as dabs and small whiting.

The general habitat of spotted ray is classed as relatively deep with them being found in anything from 75ft to as deep as 300ft. These particular rays tend to breed together during the winter months and then move into shallower water close to shore during spring to lay their eggs, hence the most productive months for angling by far being during springtime.

Image from Shark Trust. Check out their handy guide to shark and ray egg cases, here

Spotties can be found on both sand and mixed ground; however experience along our coast shows great potential from most rocky areas with a depth of between 50 and 80ft. A favoured patch of ground for local boats is the Holyhead Bay mussel beds, a patch of mixed ground littered with pockets of rock and mussel. The large area has a number of different marks where spotted rays along with the much larger blonde rays are caught with regularity. The tides in this area are fierce and allow us to fish only over the slack water period and maybe an hour or so either side. Similar to the bull huss in the area, the rays tend to feed the most during the run of the tide, which on occasions can see those anglers downtiding having to use up to 2lb of lead!

Left to the tackle manufacturers, we’d carry around a dozen different rods and reels to cover all our angling; sadly this just isn’t practical or financially viable for the majority of anglers.

Whereas one single rod will certainly not cover every situation, those looking for one boat rod to cover their ‘general’ exploits should ideally be looking towards a rod in the 8 to 9½ foot size, uptiders or general purpose boat angling rods. These rods offer slightly more versatility than a shorter downtider.

Todays market has a number of different makes and models available to every budget. We all have a favourite rod, for me it’s my original Abu Suveran. Over a decade old and a couple rebuilds later, it is still going strong and always close to hand. Aboard My Way for anglers use, we have an array of differnet rods, one of which is the Shakespeare Agility boat 12lb class rods. The Agility boat rods are perfect in size at 8 1/2 foot. The agility features a supple tip section, with power coming in quickly in the mid-section and butt when needed for larger targets. The supple tip, allows for some superb bite detectiuon in all conditons.

It is sometimes hard to set out and target a spotted ray, with us they tend to be caught on marks that also give a variety of other fish especially lesser spotted dogfish. Being a smaller ray, it is not really that beneficial to up the bait size in the hope of withstanding a dogfish onslaught. One mark during early spring or the last few weeks of autumn in particular I advise people to use standard 3 down scratch rigs, with strong size 1 or 2 hooks and fish through the doggies and other species. 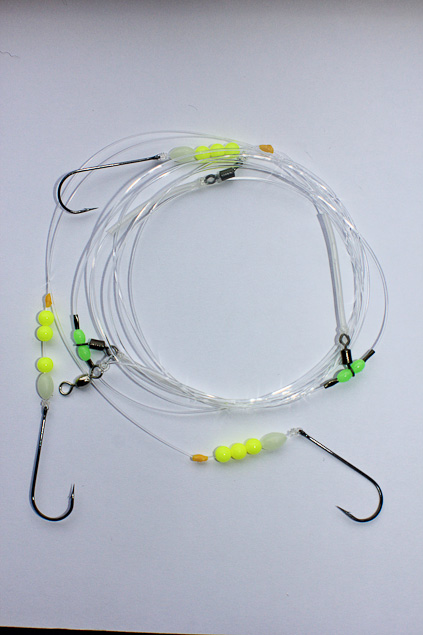 Above, 3 down scratch rig with yellow and lumi attractor beads. Ideal for an array of species including Spotted Ray

Along with spotted ray, this mark also gives up a few thornbacks approaching double figures but as soon as you up the bait size a dogfish is hooked up. By accepting them as a by-catch and working through, you can often be rewarded with some nice inshore rays.

On the mussel beds and areas with faster tides and slightly less small fish to contend with we look to bait up using mainly white fish, this helps to keep most of the smaller fish away from your hooks far longer than when using any of the more traditional ray baits – squid, sandeel or mackerel. A small whiting for example is perfect ray bait. Fresh bait can often be the key, so best thing is to try bag a few whiting shortly before changing rigs over. The fish bait can be used in a variety of different ways; with one single whiting making up to half a dozen baits, head, and tail or stomach segments being as popular as a fillet off each side. Normally hooked just the once and streamlined to flow nicely in the tide. Whiting has a very tough skin and is highly unlikely to fall off the hook. 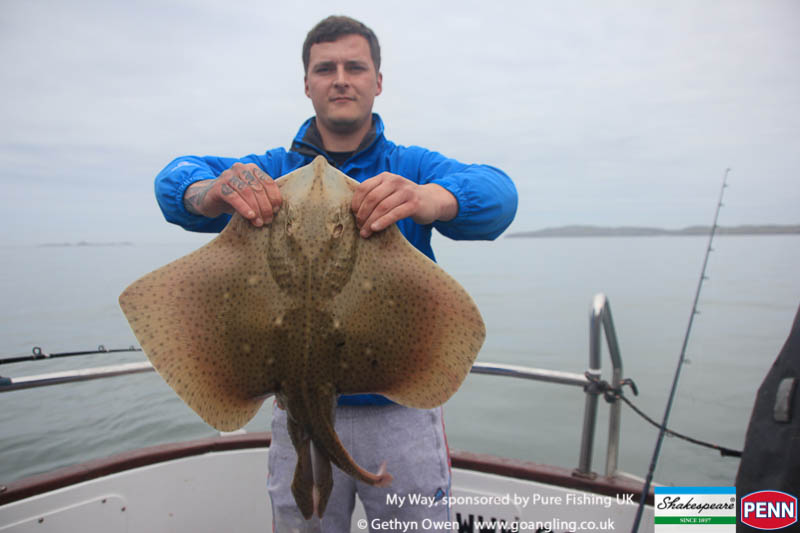 Above, the mussel beds can also offer some great Blonde Ray action, although the numbers have sadly dwindled in the last couple years. 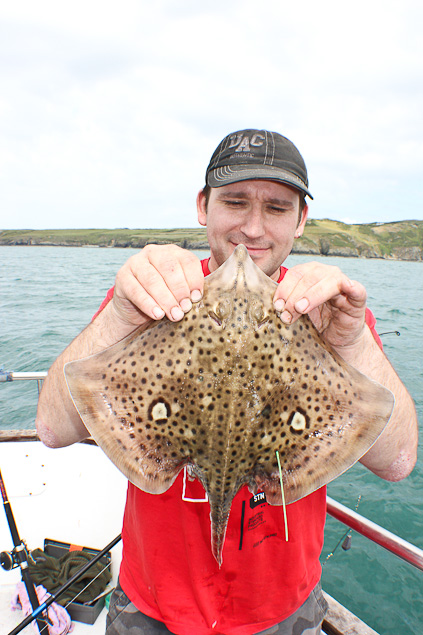 To specifically target a spotted ray, I would use a 2 down ledgered rig with good strong hooks, Sakuma Manta extras around a size 2/0. The rig is ideally 6foot in length of made of 60lb mono incorporating a couple 8mm luminous bead attractors above each hook.

Considering that we will be fishing in a fair amount of tide the rods on the port and starboard side are best advised to cast up or across the tide, with strong grip leads. Allowing sufficient bow of line out to perfectly pull the grippers into the ground and lock the rig to the sea bed. Off 4 or so rods with a clear run off the stern can fish downtide, heavy leads lowered gently into the flow of water. Fishing downtide can have its benefits in that every few minutes the angler can let out some line, lift the rod and allow the lead to move further downtide, covering more ground looking for a feature that may be holding 1 or 2 rays. Like many other species in strong tides, rays often like to lay in wait just out of the pull of the tide, behind a rock or lump on the sea bed; a slowly moving bait will prove irresistible to most species.