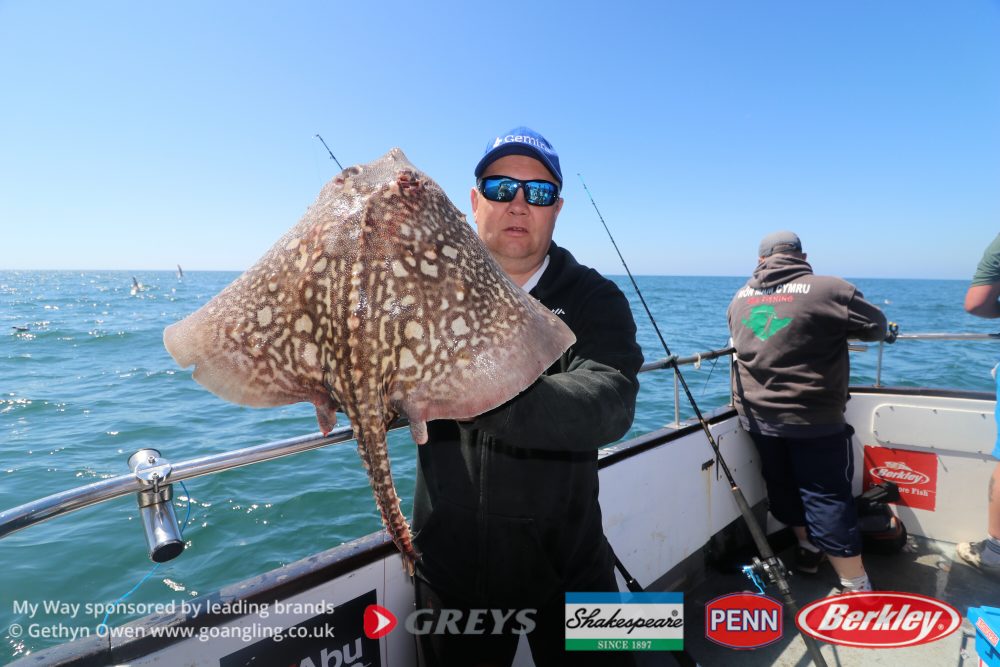 Following a few days of fresh Southerlies, a drop in the wind handed myself and friend Tommy the opportunity to spend the day out on the briny out of Holyhead aboard Gethyn Owen’s charter boat, “My Way”.With the wind decreasing all day it turn out to be a scorcher and not only was the weather good but the fishing followed suit too.

The day began by drifting over some of the roughest ground in the country, out in front and along the immense structure of the breakwater before trying around the famous ‘Stacks’. Although a little slower than normal due to the winds in the days before, a variety of species came to the boat including Poor Cod, Pouting, Whiting, Pollack, Ballan Wrasse and the occasional Mackerel before heading offshore to a wreck lying in 200ft of water in the ‘Deeps’. 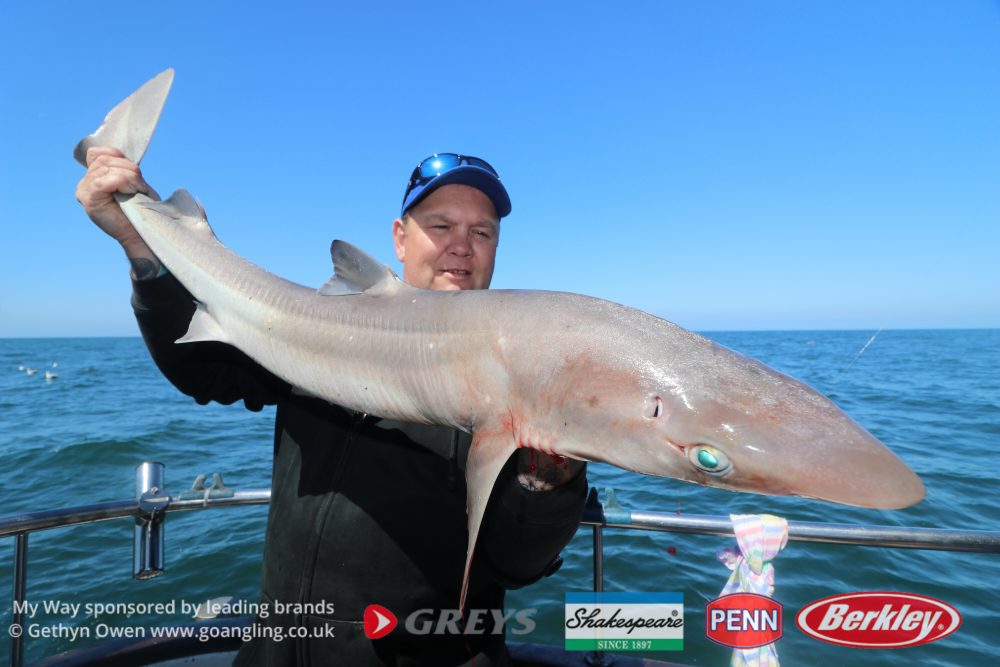 A few short drifts over the wreck produced a few Pollack and Coalfish before it was decided to anchor near it for the predators. And it wasn’t long before they turned up with plenty of action from the spurs including a PB for myself of 14lb 2oz and other fish going bigger. 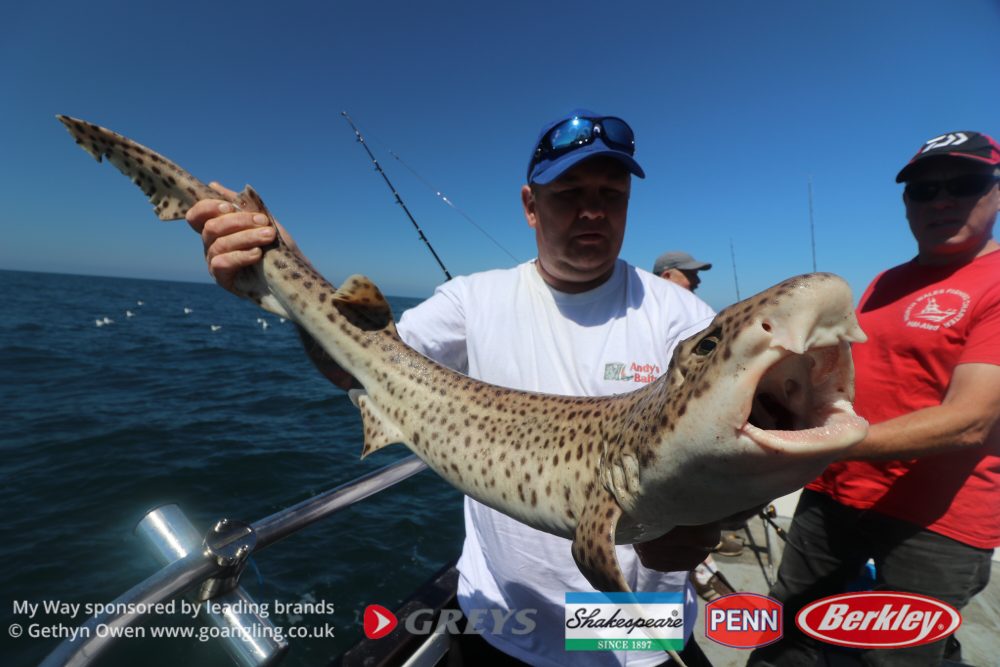 A bonus Thornback Ray and some cracking Huss also made up the catches and 4 small Tope topped the tally before all too quickly it was time to head back inshore for the second plan of the day, some Smoothhound action.A few quick drifts for a Wrasse or two en route but again they weren’t really having it … so with the anchor down for the second time we enjoyed the afternoon sunshine. 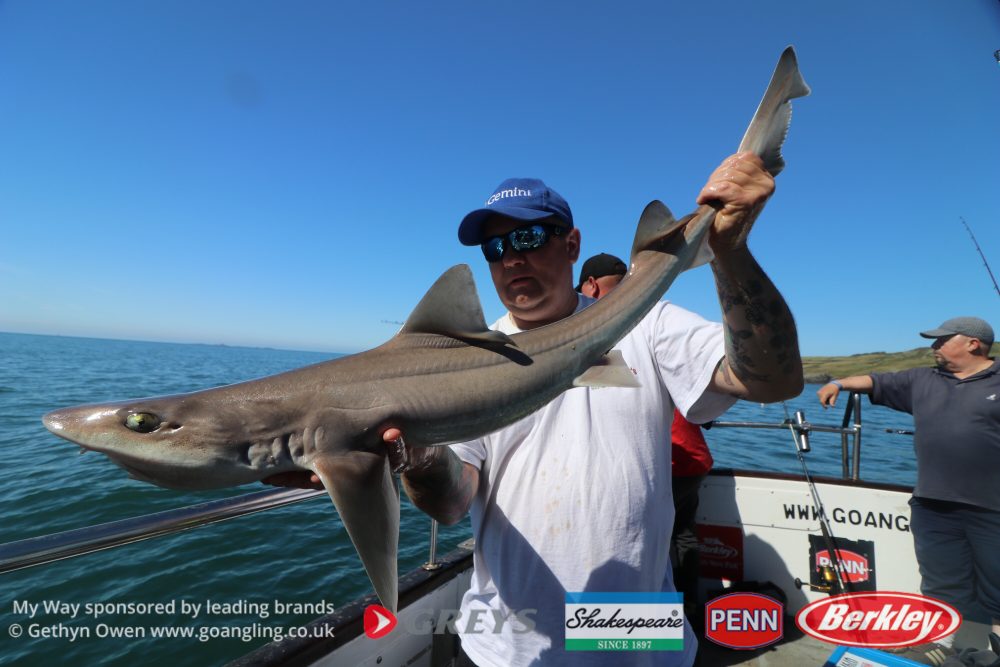 Thankfully the Dogfish failed to show in great numbers and our crab baits were left for the Smuts. In only a few hours we managed to boat a few more Ballan Wrasse and Codling and a total of 15 hounds, some of them touching double figures.. last drop saw friend Tommy’s rod on a searing run only to have his snood snapped off! Gutted! A short run back into port on a glorious evening and smiles all round.

Thanks to both Gethyn and Mark for an enjoyable day afloat, we’ll no doubt be meeting again

Report from Bruce Hough, can be found in the Facebook Group Braggin’ rights

My Way is sponsored by Pure Fishing – this includes Penn, Shakespeare, Greys, Berkley and many more http://www.uk.purefishing.co.uk