At a guess, as boat anglers and regardless of their sweet taste, dabs are not quite near the top of our target list when planning a great day afloat. Dabs are the smallest of the UK flatfish and despite weights recorded in excess of 2lb are generally widespread in the 8oz bracket. 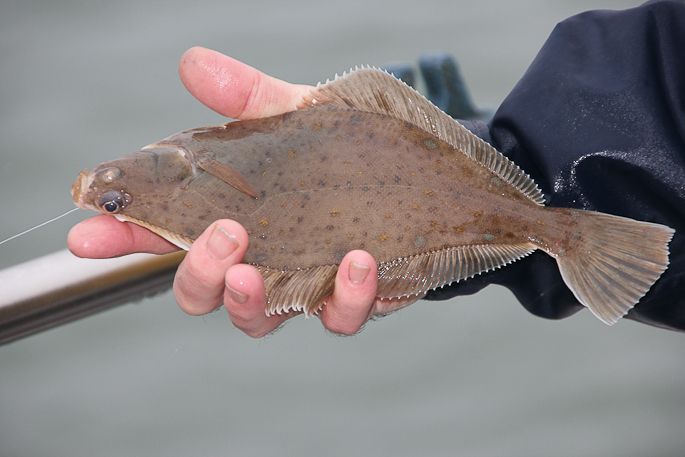 A dab that exceeds 1lb would correctly be considered a great catch and although they’re not unheard of around our shores over the magical 1lb mark, they do not appear to put in too regular an appearance.

Your best chance of a 1lb+ dab is early spring through to early summer; it is during these times of year they tend to be adding weight during their breeding cycle.

The dab is fairly easily identifiable when compared to other flatfish such as flounder and plaice. They have a white underside and normally a light brown topside.

Dabs have light spots on the top that are more a yellowy orange colour than the striking red of a plaice, yet on odd occasions they are still misidentified by anglers, especially when small. 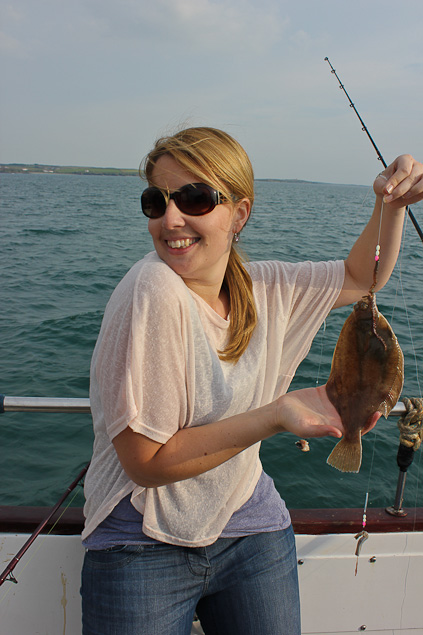 The flounder has a mottled greenish brown colour on its topside, occasionally with dull red spots; it has a rough skin to touch with quite a rough and pronounced lateral line. A plaice on the other hand has a smooth topside when rubbed either way, the dab in contrast is smooth from head to tail and is rough to touch when a finger is moved over the fish from the tail to its head.

Commonplace around the whole of the UK dabs can be routinely found in waters between 20 and 40 meters in depth. The habitat of a dab can though vary; whereas they tend mainly to be found in great numbers over sandy ground, they can also be caught over both mud and mixed grounds.

Further up the north Wales coast from me boats sailing from Conwy and Rhyl for example find dabs in abundance through much of the year. Their winter and early spring dab fishing though is exceptional. 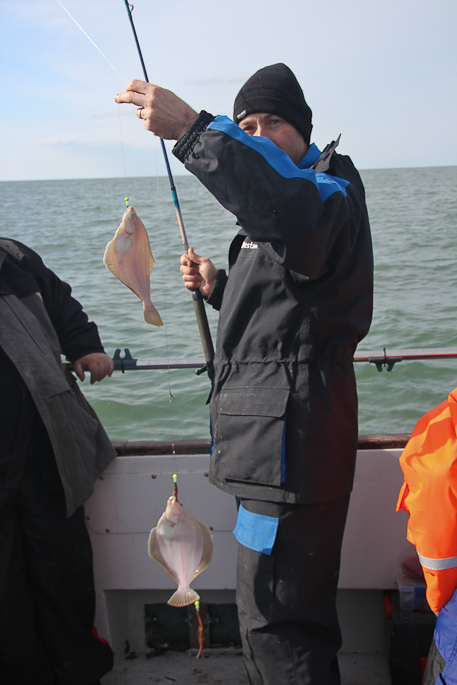 Having some extensive sandbanks within easy reach of port, the skippers can put anglers over marks that produce some of the country’s best dab fishing with all rods aboard pulling in 3 dabs a time and at very regular intervals.

In comparison we have very few sand banks with the vast majority of our dabs taken over fairly mixed ground with a good number making an appearance on a small mud bank close to the harbour entrance.

Dabs have a varied diet that includes small crustaceans, starfish, worms and fish. As anglers, we tend to use various worm baits often tipped with fish or squid.

When reading up on dabs, many articles suggest that dabs tend to be lazy feeders, lying in wait for prey to swim passed above, or worms to break surface nearby. However I know far more ports that catch dabs at anchor than on the drift, but when fishing one thing that stands out is that they do need a small run of tide to help them feed.

This run could have the effect of moving your static baits gently thus attracting dabs to your hooks, with other dabs moving in to see what the commotion is all about. 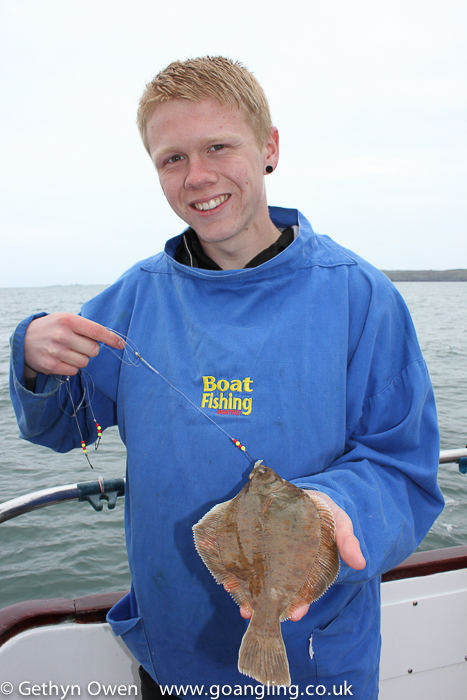 Reading the various articles and exploits of other anglers where they concentrate on light rock fishing (LRF) methods and in particular the use of soft plastic baits its noticeable the number of small flatfish being caught on slightly twitched baits. Though they do appear to be predominantly flounder, this I think mainly down to the sheer number of anglers fishing estuary marks during windier winter spells. Boat anglers could be able to adopt similar tactics / soft baits during a day afloat whether at anchor or indeed on the drift for targeting all manner of flatfish..

The choice of rod & reel is all dependant on the ground, depth and tide etc of the particular mark that you are fishing and of course your current set up. If possible it’s always best to fish as light as you can get away with when looking for these and other small fish. A light sensor tip rod and small multiplier or spinning rod and small fixed spool are ideal outfits for dab fishing. They offer sensitive bite detection and allow you to make the most from your battle with these small fish

Hook choice is crucial bearing in mind that the vast majority of baits being used will be worm based, thus a longer shanked hook will help with good presentation. With dabs having fairly soft mouths, a very fine wire hook can be used when targeting them specifically, but with us anchored in an area that can throw up other species such as dogfish, codling small ling and the occasional bull huss, a small yet strong hook is required.

Kamasan Aberdeen’s are normally ideal hooks for dabs, but are a little too soft if there is a chance something stronger being caught on the mixed ground so we tend to look towards a heavier gauge of hook.

Mustad have 2 excellent choices in the 3282 and 3261 range of hooks, with sizes 4 or 2 the most effective. Or you could try Varivas Saltwater Champion and Aberdeen’s, both available in size 2.

When looking for dabs your chances of the double or triple shot rigs are increased by keeping the rig as tight to the sea bed as possible, a 3 down scratch rig fished off a tube boom or similar is the correct rig choice. 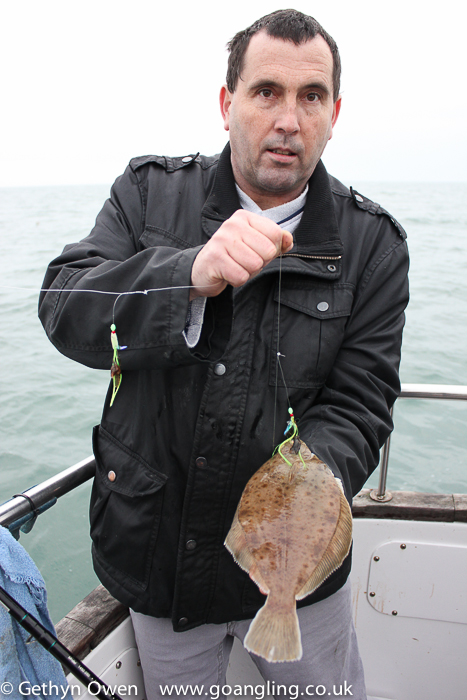 The rig body needs to be around 4foot in total length with the 3 hooks spaced equally along the body. 40lb body and 20lb fluorocarbon hook lengths are ample enough for all that may take the baits; however additional care needs to be taken when landing anything bigger than a dab!

Flatfish respond to attractors, Plaice especially are regularly caught using a vast array of colourful; beads and sequins on the snoods in addition to the baits.

Dabs are no different, and my personal choices of attractors are 5mm beads in either a bright yellow and red or a red and luminous combination.

Ragworm and rag tipped with squid can be a lethal cocktail for dabs from a variety of ports. Small maddies, sometimes bunched together can result in some very good sized specimens, especially when fished on the drift over undulating sandbanks. Similar to fishing for plaice, the worms are bounced slowly over the depressions seeking out the ambush points of the larger dabs.

In north Wales, when seeking out dabs in any quantity form either shore of whilst afloat, sticky black lug has to be one of the best baits available. 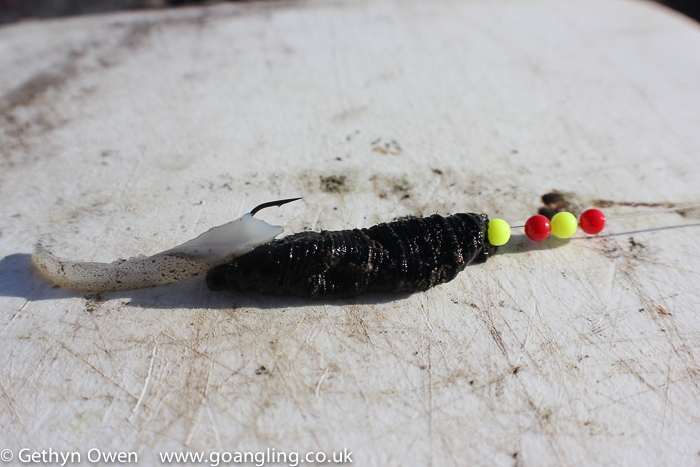 Sticky black is the name often given to black lug that has been frozen, thawed and re-frozen a number of times. The process dries out the worm and leaves it very sticky to touch and also with a very strong smell.

The worm can be used in a couple of different ways, either threaded up the hook and just passed over the eye of the hook and then tipped off with a slither of mackerel or squid. This slither helps prevent the worm from slipping along the gape of the hook and masking the point.

Alternatively with a baiting needle and some elastic you can prepare some black lug sausages to offer a solid piece tipped off once again with mackerel or squid.

The mixed ground where we tend to see the most of our fish is relatively shallow at 18m, tactics vary around the boat when fishing these marks early season. As explained earlier we don’t see triple shots of dabs often, our marks tend to be inshore areas maybe the odd brace but more suited to a good variety of species. The stern rods tend to drop down tide often trotting back slowly covering more ground with the others across or uptide, by uptide I simply refer to gently casting the bait away from the boat. On occasions moving the baits whilst at other times having them remain static, not the traditional all out uptide assault as used with some species.