North Wales has long been associated with big tope and spurdog.

Tope excess of 80lb have been brought to many boats and spurs to 18lb have been landed recently with both fish reaching on average 35lb and 12lb respectively. For example pictured below is Anthony Meli with a 79lb tope, caught and released aboard My Way in August 2005. This fish was later confirmed as a new WFSA record.

Tope fishing is a GO Angling favourite. Sitting and waiting patiently for that small click and then accelerating first run of a big tope is really an exciting experience, and one we love to share with our anglers

Tope fishing from Holyhead varies depending on fishing grounds and tidal size. Tope trips aboard My Way can be accommodated on a variety of tides ranging from 23′ to 30′. Neap tides being the most productive for quantity of tope being caught. Small tope in the 15lb bracket tend to start making appearances from mid April, with June through until mid Oct being the most productive of times of the year for the bigger fish. From these fish the female tope, can reach up to 80lb in weight. 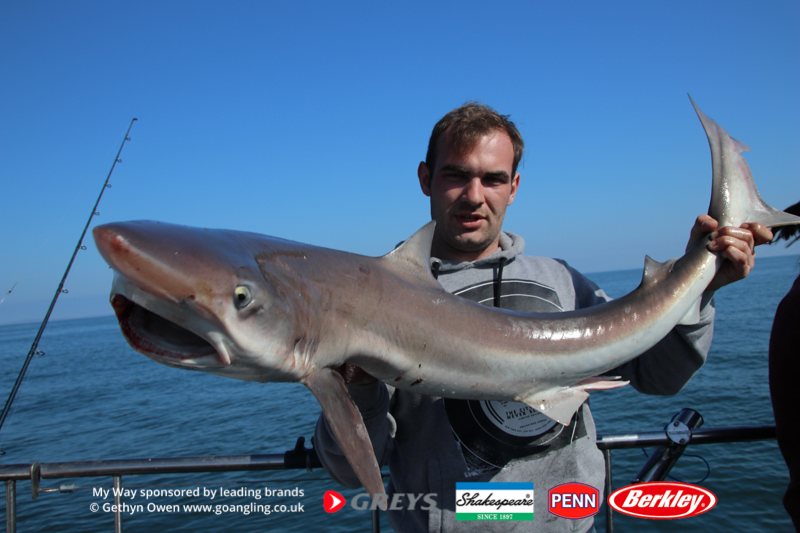 While fishing for tope on many of the grounds, we also encounter numbers of spurdog. Spurdogs have seen something of a revival in recent years. Sadly the spurdog was long lined to near extinction not so long ago, with pleasure anglers suffering the loss of a good fighting fish. A shark that can be found in large packs, usually of the same age sex and size, the spurdog is a highly migratory shark moving from one area to another when looking for food. 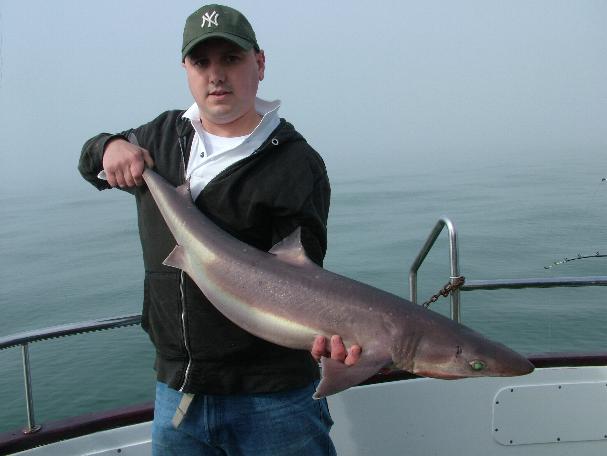 It is fairly easy to identify a spurdog; the upper body is dark grey with white spots usually present. The under-side is white, the most noticeable feature being a protruding spine at the front of each of the 2 dorsal fins. Tope is the most abundant large shark native to the British Isles. They generally have a light grey top and white belly area; however some tope have been caught with a dark topside. 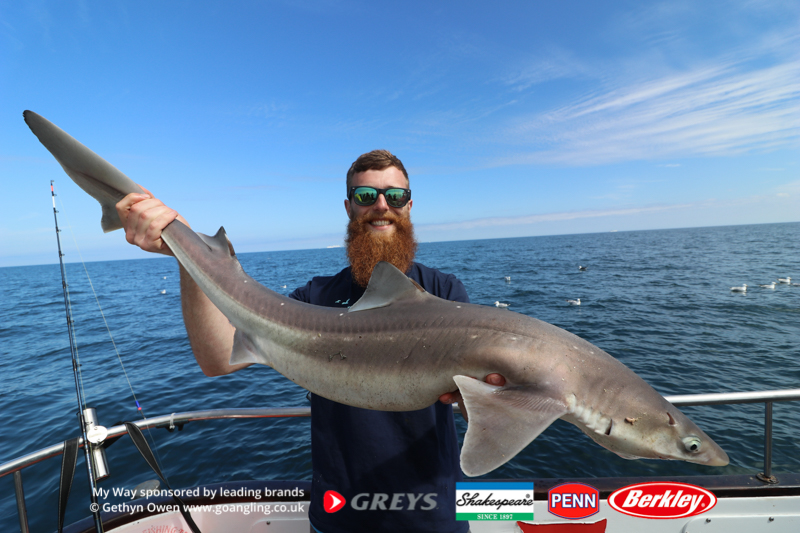 A good uptider is the main choice for tope fishing. Down tide rods can also be used in around the 30lb category. Uptiders of both 4oz to 8oz and 6oz to 10ox can be used when seeking out the very big tope, huss and spurdog. Reels can range in size and type. There are a host of different makes and models to choose from however with reels sized similar to PENN 15, PENN Squall, ABU 7000 sized reels you can’t go far wrong. Mainline in the 20 – 25lb range either mono or braid. 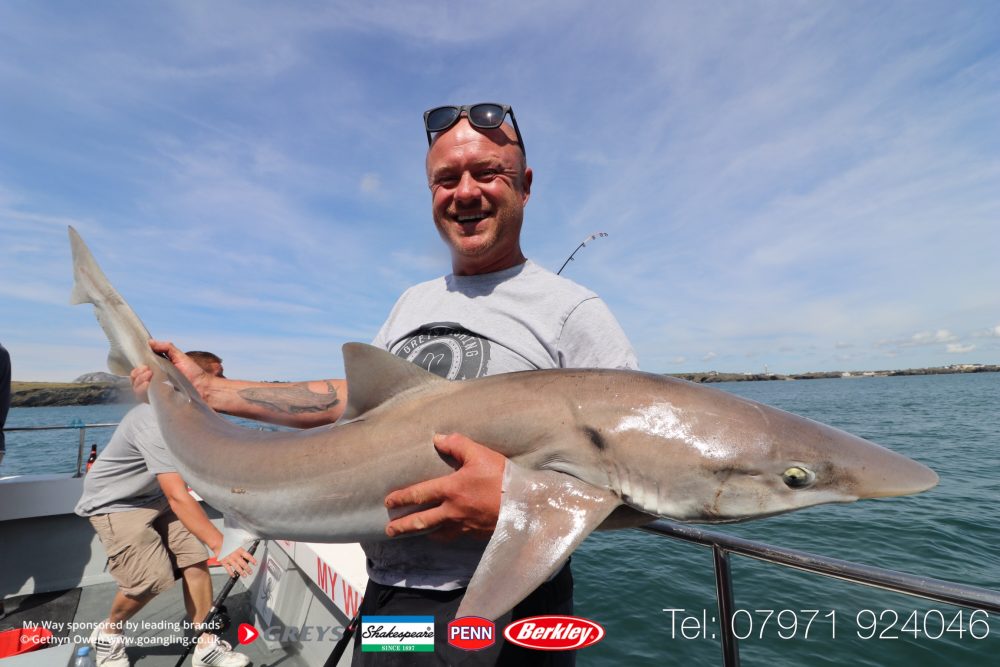 All you need is a 6′ – 8′ length of 150lb to 250lbmono. One end a good heavy duty swivel and on the business end size 6/0 to 8/0 hooks. Bronze hooks are preferred as these will quickly rust away if the hook is left in the fish. Some people prefer single hook, others prefer a pennel set up. Either rig is sufficient. A good selection of weights from 6oz up to 1lb are the norm. When uptiding quality grip leads are used to fix the bait to the sea bed. Downtiding will require leads up to 1lb in weight.

There are plenty of high quality uptide and downtide rods along with multiplier reels for use, free of charge, aboard My Way should they be required. Simply mention your requirement at time of booking and they will be set up awaiting your arrival on the boat. 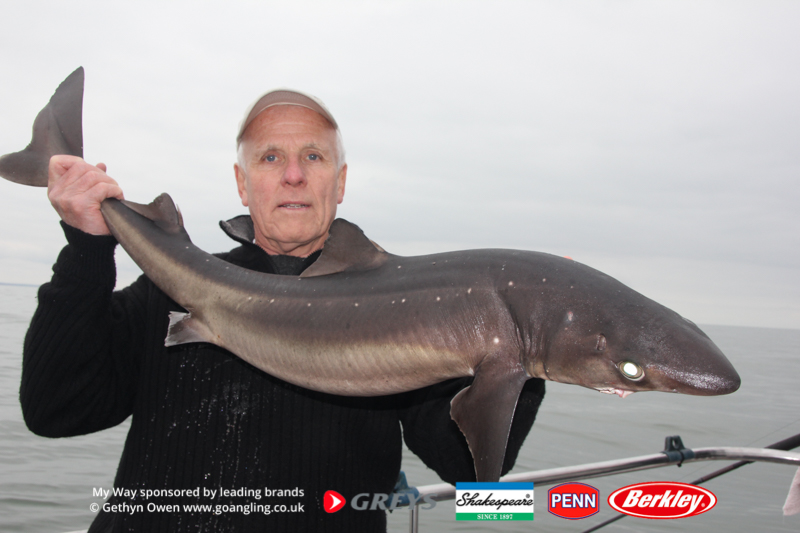 All tope caught aboard My Way are released quickly, more often or not at the side of the boat. If a personal best weigh/measure and photograph is required, this can be done quickly using a purpose made weigh sling.