Through the General Fishing articles I have tried to write on the merits of different fishing rigs to help us all get the most from a day afloat, whilst at the same time not needing to set sail with everything but the kitchen sink packed away in the tackle box. 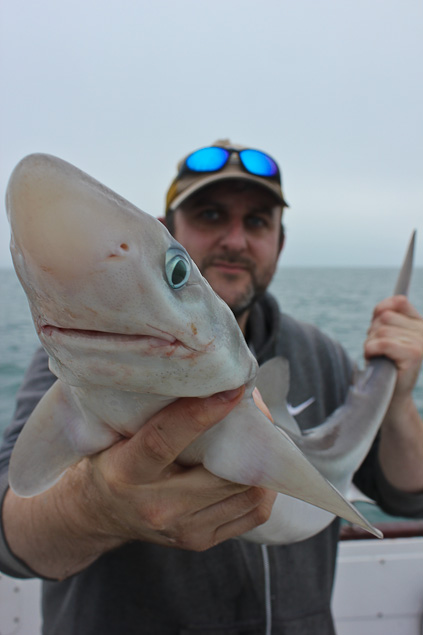 All too often you see anglers with a seat box, on which sits a top box on which sits a winder box, too many rigs it gets far too confusing at times. With a small selection of rigs and a few bits of tackle, you are adequately prepared for most outcomes.

Towards the end of May in 2012 we had a couple days set aside for individuals with the main purpose of both days targeting the big smoothhounds of Holyhead Bay on light tackle.

On both days, four from the 7 anglers had made the journey to Anglesey from the far north east coast of England. Having sampled some great tope fishing in deep water with us in 2011, they were now determined to tackle light and snare a double figure shark in shallow water.

We set sail early the morning of the first day, it was only a short 20minute run to our intended fishing area and everyone was keen. I had already landed 2 smoothies over the magical 20lb mark in the past fortnight, with many more in the 16, 17 and 18lb brackets. After a few hours of inactivity bar the odd dogfish, things were not quite going to plan. 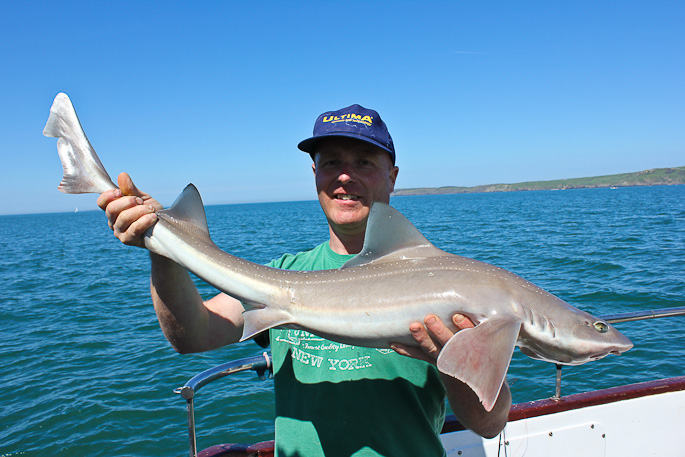 We had movement in the tide, the crabs were perfect, a little too much bright sunlight for my liking, but we should still be connecting with a few hounds.

This was primetime for Holyhead. The hounds though had been proving to be problematic, with the packs going off the feed just as quick as they would swim through our area eating everything in their path.

We did manage two hounds for our six hour effort, Dave with a hound of 12lb 8oz and a 6lber for Roy Matthews, small yes, but a first smoothhound for Roy so it was received with a big smile. 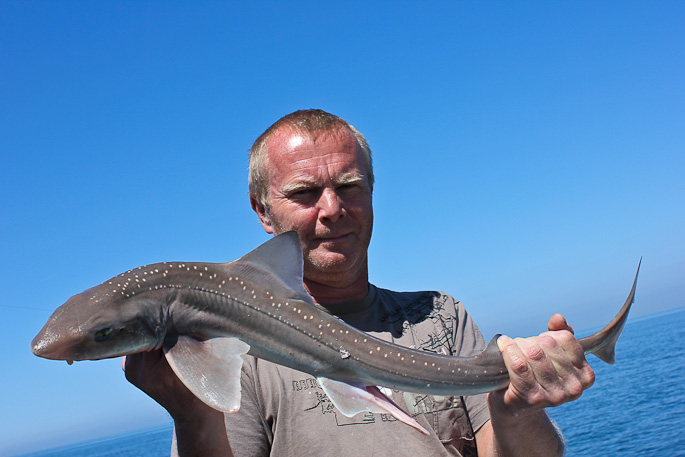 Not quite the return we expect though, so for the last 2 hours we changed tact slightly and went scratching out species over the slack water period on the mussel beds. Fortunately these guys were time served anglers and were prepared for any slight changes our day may have had.

After a quick delve into the tackle boxes the deck of My way was graced by a variety of 3 down, 2up 1down and single ledger rigs all being prepped for whatever may have been be lurking beneath us. Ok, we weren’t going to re-write any record books during the last couple hours, but what we did was catch dabs, dogfish, whiting, codling and the odd huss in single, double and triple shots.

Day 2 came along and with more bright sunshine and a fairly good outlook for the day ahead I suggested we change tact by starting off with some drifting around the coast for some mackerel, pollack and wrasse before heading offshore to a favourite mark of mine and try for some spurdog and huss. 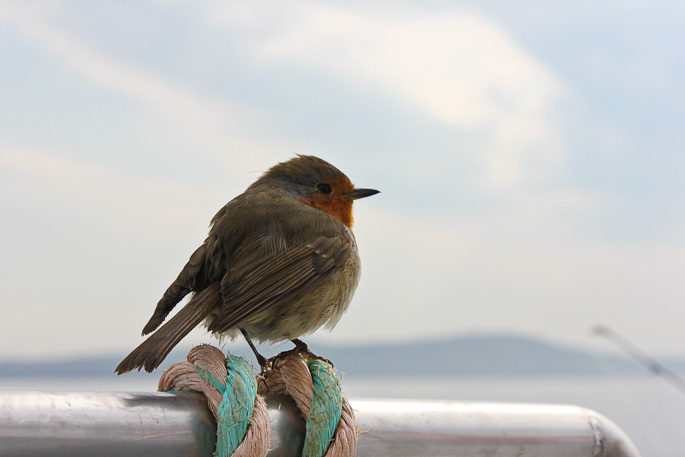 Small Robin that joined us for a small time.

With the start of the neap tides and especially the settled weather we were in with a chance of around 3 hours at anchor in Holyhead Deep, we could try for the hounds later that day if everyone was still game.

Based on the no show of the smoothies on the Monday no one really needed any extra convincing, the 3 regular My Way anglers that joined our four guys from Newcastle were happy to go with this idea following our tales of woe from the previous day.

So it was a complete change around and as I threw the ropes off to release My Way from her berth the lads tackle up for some light rod work on the hard fighting small wrasse and pollack around our coastline.

After a 30 minute steam around the headland I set My Way up for a series of drifts underneath South Stack lighthouse. Straight away everyone was hitting small ballan and the odd cuckoo wrasse. A few nice pollack of around 3lb also came aboard and were quickly despatched by Ari who had ideas of a fish supper.

After an hour of playing about on the drift, the tide had eased sufficiently enough for us to make our journey 8 miles SW to the edge of Holyhead Deep, on way rods, reels and end tackle were changed for what was hoped would be a double figure fish bonanza. The north east tackle boxes had already been tested when a change from light single ledgers was made to drift rigs; 2 or 3 hook paternosters; now we wanted something different yet again. Fishing in the deeps is not rocket science in that you simply think big; huss, spurdog and tope always the main targets. Granted there are other species out there, dogfish, gurnards, whiting and dabs to name a few, but you can catch these inshore, if the weather allows for a trip time offshore, then we have to concentrate on the big critters only and with all species having sharp teeth and rough skin adequate mono is required to save on losing fish.

There are only a couple rigs that you need to be looking at when in the Deeps, a basic 2 hook paternoster or ledger is the first with a heavy mono single hook running ledger when targeting the very big specimens.

The 2 hook rig made from 150lb mono body, and 2/0 to 5/0 hooks snoods being 80lb wire, – ideal when looking to target spurdogs with razor sharp teeth. I’m not sold on the need for attractors on these rigs when targeting big fish in the murky waters of Holyhead Deep as I think a well presented bait oozing scent does just the job.

However for spurdogs,  large luminous or orange Muppets positioned just above the hook can be deadly in Holyhead Deep and we sell our own version aboard My Way. 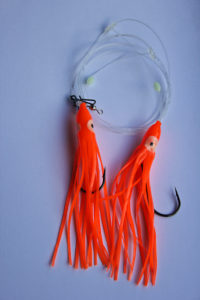 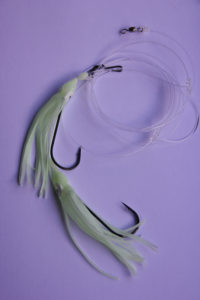 Alternatively a simple running ledger for tope, tied from 150lb mono and using either an 6/0 or 8/0 circle or J hooks with big baits, will help the angler target a tope and also the better specimen huss and spurdog.

Baits choice is angler’s preference; I always look to have a number of frozen mackerel, bluey and boxes of squid when heading off to the Deep. If we get the chance to feather before our journey offshore, then fresh mackerel, pollack, codling and coalie all make for fantastic baits for the bigger predatory species in our waters.

Spurdogs are great fighting sharks to target on a light rod. The upper body of a spurdog is usually grey or a dark charcoal colour covered in small white spots with, it’s under-side white. A spur is often referred to around the world as a spiney dog, the most noticeable feature being a protruding spine at the front of each of the 2 dorsal fins. 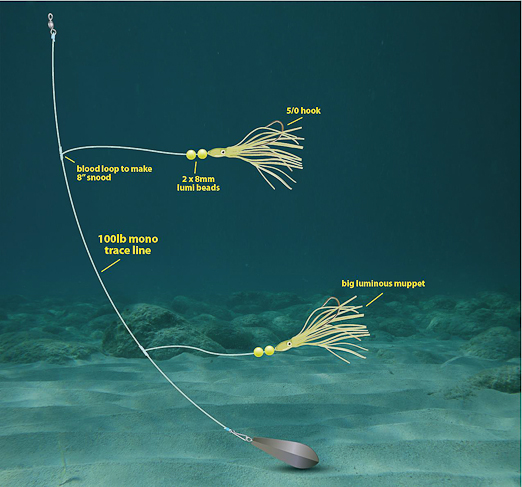 The spurdog is a slow growing shark; the females are live bearing and carry the pups for over 18months with litter sizes up to 20. They can be found in depths well over 500m and feed from the mid to bottom layers.

We target the spurdogs at anchor in around 80 metres of water.

Large pack fish, they roam the sea bed continually feeding, it easy to see how commercial long liners can eradicate this particular species from a given area in a very short space of time.

Currently the spurdog are a protected species and cannot be landed ashore by commercial or recreational vessels. Already we are seeing an improvement in both the size of spur and the size of the packs. 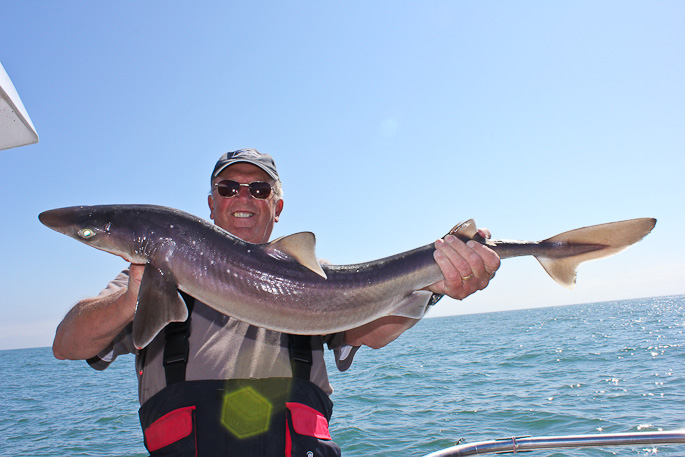 Typically in north Wales the sea bed is also littered with lesser spotted dogfish. Baiting up is very straight forward and either half a fish or chunks work far better than a flapper.

They also help in deterring the dogfish. But believe me you’ll also get the odd LSD coming up from 200ft of water with half a mackerel in its mouth!

After the 45minute journey out to the deeps, I had not long set the anchor and was busy putting the kettle on when the first call of net came from the deck. Roy, ever so keen to bag a double figure spurdog had eagerly dropped his bait the 250ft to the bottom and had waited only a few minutes before his rod twitched.

We all watched with anticipation at what Roy was bringing to the gunwales, with 2lb of lead and a 2knot tide it was a hard species to call!

But don’t let that put you off the thought of fishing Holyhead Deep, we arrive just before slack water and fish the turn of the tide – more often than not for part of our anchor we end up on as little as 3oz. 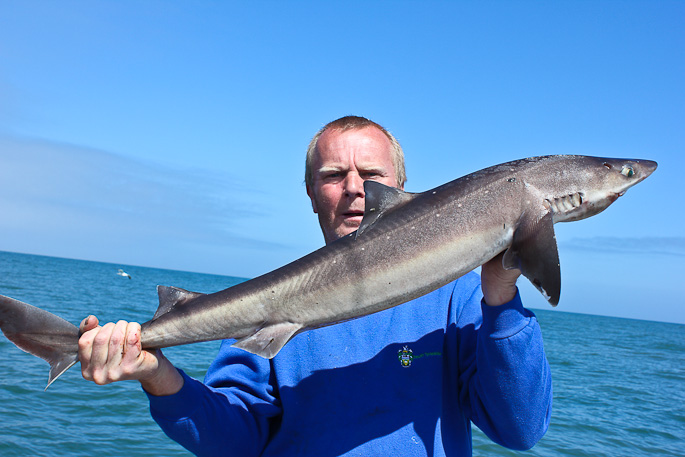 After a good heave and a few huffs from Roy, a nice double figure spurdog broke the surface just off My Ways stern. Not the easiest place to net a fish in a ripping tide and as Roy stepped back I reached out to the shark … and knocked it off! Well, he didn’t say anything but I got a funny feeling Roy wasn’t happy! Fortunately for me, this was only the first of over 50 double figure fish, mainly spurdog that the group of 7 guys were going to land along with some big bull huss, smaller spurdog and ever present lsd, all of which during a frantic 3 hour deep water session. Hectic is an understatement, descending 250ft with weight and tackle and then shortly after hitting, playing and then landing hard fighting sharks, it was a tiring time for everyone. 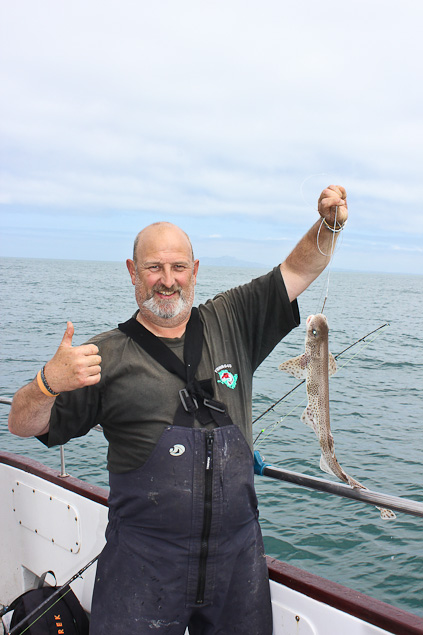 Even poor Steve Harrison, who was strategically targeting the dogfish for the first couple hours, then came good towards the end with a number of big huss and spurdog. 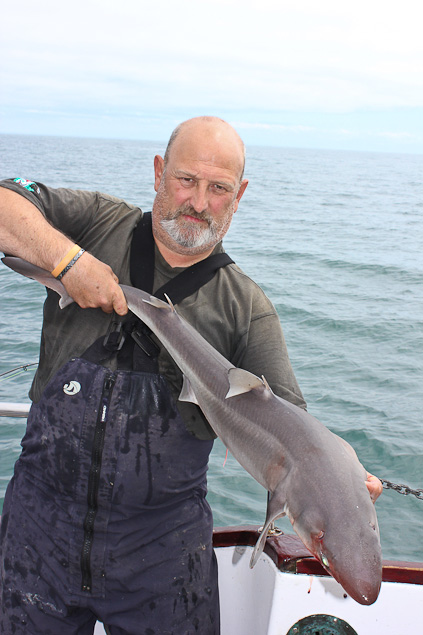