This article was written for Boat Fishing Monthly magazine and can be found in the November 2012 issue.

Conger fishing, especially for the bigger specimens approaching 100lb is best undertaken along the south coast of the UK, fishing into some of the big sunken wrecks in the English Channel. 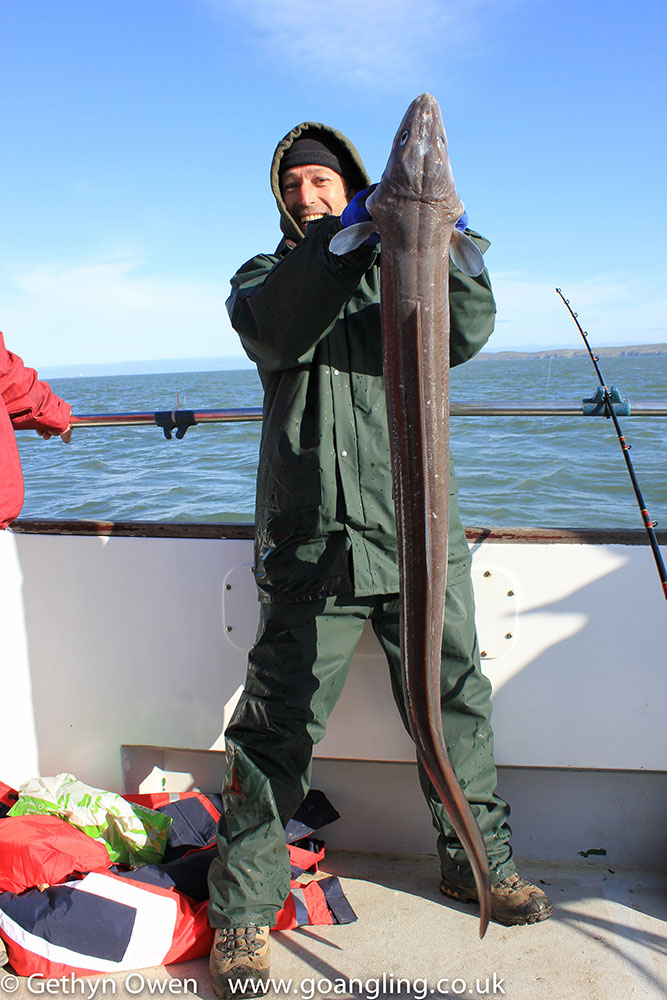 Many eels however are caught from around the North West Wales coast and from the wrecks in the Irish Sea and Liverpool bay on a regular basis.

The welsh record though is there for the taking, and with eels to 50lb having come aboard My Way in recent years it is only a matter of time before someone is able to go 70lb plus. 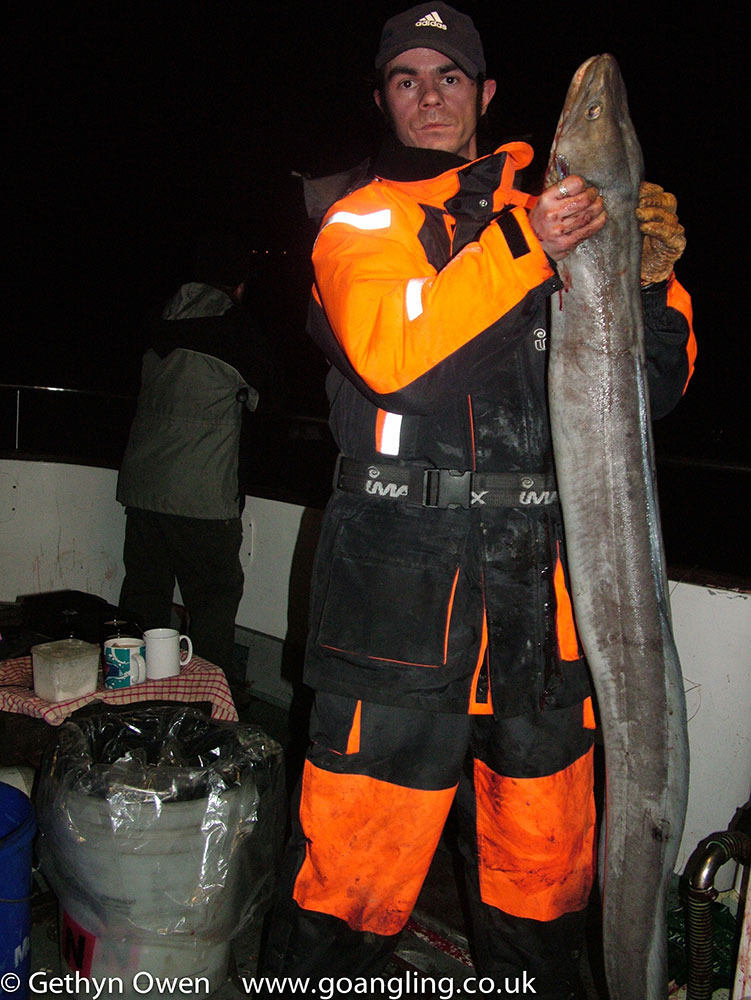 With the WFSA not requiring the fish to be killed and brought ashore any longer, this has given added impetus for many anglers to look for bigger prey, plenty of good quality photographs against sizable objects are required, and the WFSA committee will then pass judgment on the catch

It takes a great deal of time and effort to target such fish, but can be equally rewarding in the capture, the photograph and massive sense of achievement.

There are up to 8 species of conger eel to be found in the sea. The eel we find around the UK is the conger oceanicus, it is one of the largest, with eels in excess of 200lb reported in commercial nets .The conger eel has a very large head and protruding lower jaw, with a dark grey top half and white underside.. The conger body does not have any scales but a very smooth skin, this skin often described as being very slippery or greasy to touch. Both the dorsal and anal fins have a black tint around the edges. 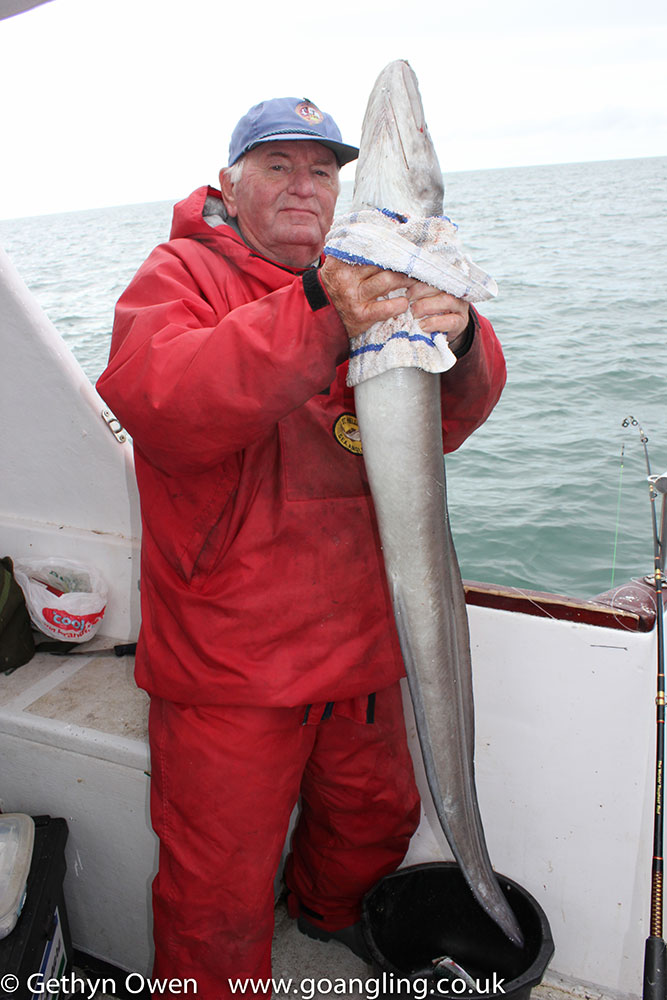 Congers around our shores are predominantly fish feeders, with mackerel, pouting, poor cod and whiting being part of the staple diet. Cuttlefish and squid are also renowned for taking some quality inshore conger eels, especially from some of the south coast ports. I was fishing with Ivan Wellington aboard his charter vessel Top Cat from Weymouth a number of years ago and watched in awe as he loaded up on cuttle and squid baits to land a serious number of 30lb congers one after another from some relatively shallow broken ground.

The conger favors rough ground, from very rocky reefs, rough mixed ground for the slightly smaller specimens to old ship wrecks etc. for the much larger specimens. When feeding congers appear quite happy to lay in wait in their lairs, waiting to ambush prey as it swims by the structures or reefs that the conger has made home. In this ground they can find various holes to lie up and hide from their prey. 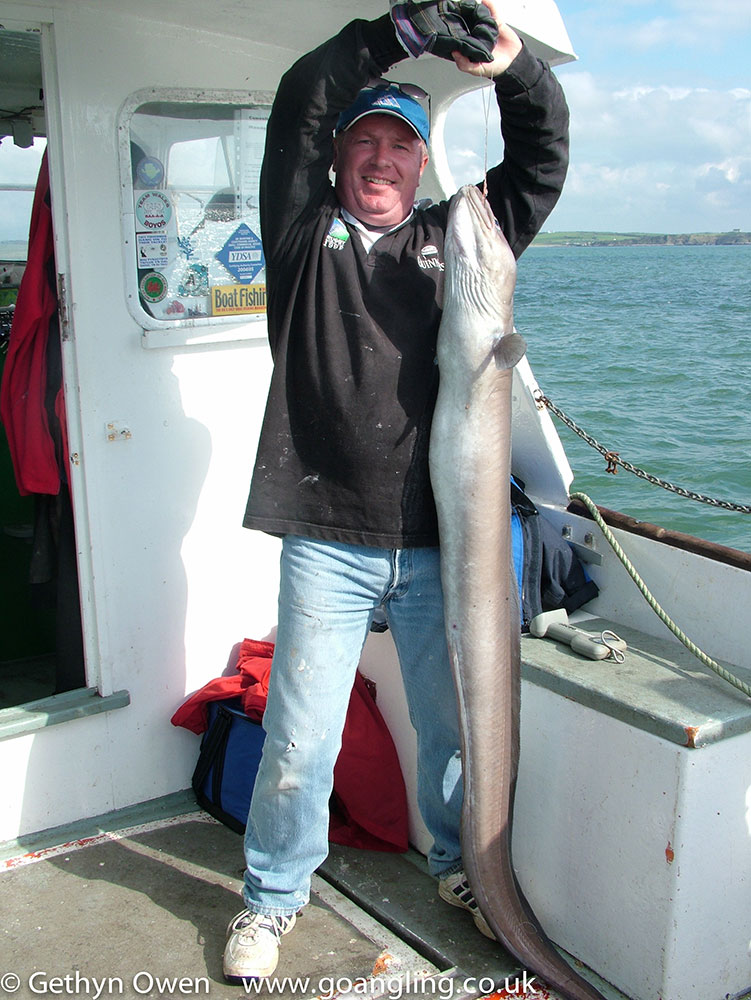 Congers are best known as nocturnal feeders; however in depths of over 100 foot where light penetration is negligible they tend to feed depending on state of tide more than time. Some of the reefs and wrecks around Holyhead are in only 40 to 60ft of water and the congers here tend to feed mainly after dark; however the odd eel does put in an appearance from these shallower grounds in daylight especially on dark and murky overcast days.

Not an awful lot I can tell you about the breeding cycle of conger eels. It has been a long held belief that congers travel thousands of mile to the Saragossa Sea to spawn in depths of thousands of feet. No amount of research on the internet seems to confirm or deny the actual goings on.

Around our waters and taking into account the size of eel we regularly see, rods in the 20 to 30lb bracket are commonly used when targeting wreck conger around north Wales. If venturing into some of the conger rich waters of the south coast where a 100lb eel is a good possibility then a rod of 30 to 50lb class would be more suited for the job.

When asked for guidance on rods and reels, I always advocate spending more money on a good quality reel that will last the angler a number of years, a rod can be purchased at a relatively cheap price from a vast number of manufacturers.

Reels on the other hand, have to be strong enough to cope with an array of different situations and especially when conger fishing and the playing and landing of a powerful hard fighting fish. Abu, Shimano and Penn offer a wide range of quality reels well suited to congering in our waters in particular that will also allow the angler use in other situations. 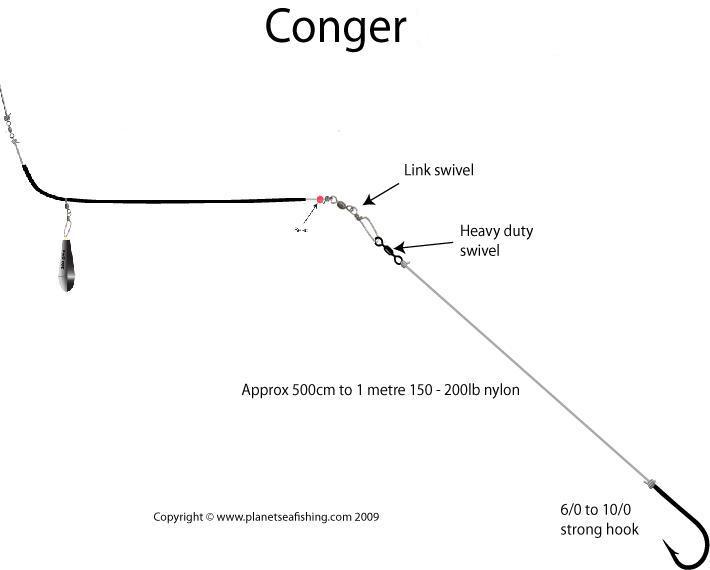 When venturing into waters where the 100lb’er is up for grabs, it is best to go suitably equipped and Penn Senator and Shimano TLD 20 and 25 reels have proved ever popular. It is worth chatting to your skipper beforehand to check on hire gear before spending on a reel that may only get the odd use through a season.

Rigs are very simple and straight forward, with no complicated pieces of tackle to clip here and there. A basic running ledger is all you need. Our preferred trace is 4 – 6 ft in length and made up of mono with a breaking strain between 150 and 250lb; on one end of the trace a good size 2 or bigger swivel and on the business end a strong 8/0 hook. 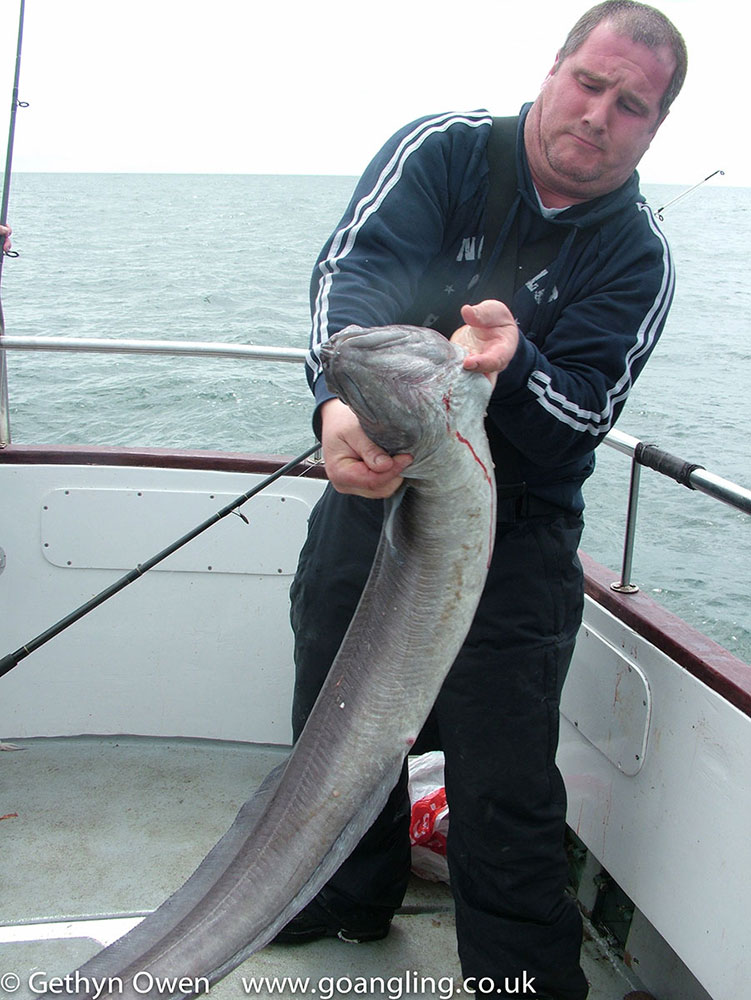 Some anglers prefer to use a pennel rig, where two hooks are used within the same bait, not entirely necessary and down to personal choice, a pennel does though aid the presentation of a big bait.

A trick ‘borrowed’ from Irish angling friends is the use of a pirk just before the bait. This chrome metal bar, also used as a weight in heavier tides, adds a glimmer to the bait to help entice the conger to feed on your bait, some anglers believe that the conger moves in on the noise of the pirk rattling against rock or wreckage. There may be an element of truth in this as another trick from an angling colleague here in Wales when both conger and tope fishing is the addition of a few Booby Beads to the rig, just behind the hook. Booby Beads are available from most tackle shops and are simple pieces of plastic that clip together, they contain loosely a small metal ball bearing with the vibration and noise from this helping the eel hone in on your bait.

One of the best baits and most conventional for conger fishing is a fresh mackerel flapper. This is where the tail and backbone of the mackerel is removed from the fish and the hook inserted through the lower jaw and out between the eyes. The fleshy sides then ‘flap’ in the tide, releasing scent and giving movement to the bait. Beware when using this method with frozen mackerel on the reefs and inshore wrecks around Anglesey. With the abundance of dogfish in the area, they tend to move in on the bait and spoil your conger hunt before it has got started. When using mackerel fresh or frozen we tend to fish them whole or half, this does deter but not entirely put off the dogfish from the bait. Some of our preferred baits include cuttle and large squid, but also whitefish such as whiting, pouting and poor cod. 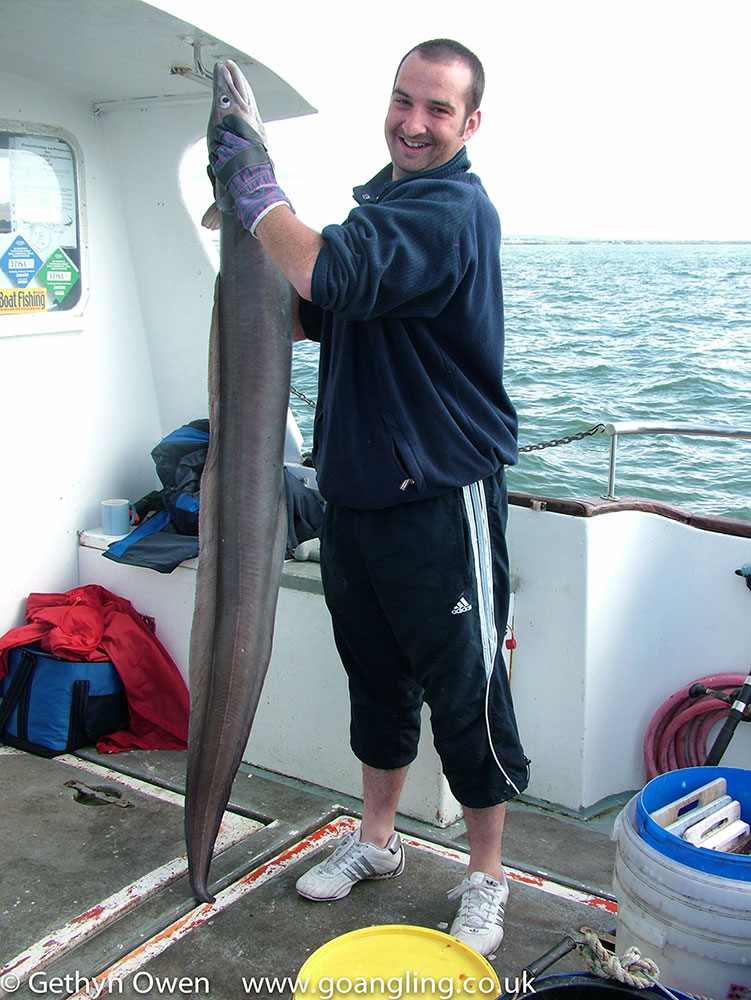 Congers are hard fighting fish, reputed to be one of only a few fish to physically swim backwards; the fight is generally made up of thumping big nods as the fish makes attempts to shake free and back to its lair or around the safety of the nearest rock or crevice. In complete contrast the initial bite from a conger can be one of the shyest you will ever feel. The smallest of rattles, sometimes brushed away as a small fish, can result in an adrenaline pumping fight that the angler was far from expecting. If the rattles are not noted, look out for the rod tip, slowly bending down as the eel picks up the bait and retreats slowly to comfort and safety to consume the bait fully.

If you notice these small rattles, or slight downward movement in the rod, pick the rod up slowly, and reel any slack line in preparation to lift into the fish and reel it free from wreckage or rocks. Situations vary and only experience after each fish will help guide you in the right direction.

What you need to bear in mind is that the congers are surrounded by rough broken ground or wreckage, from which they can nearly always find some form of protection; a known method being to wrap their bodies around rock or wreckage and not budging – your patience or the line parting well before the fish. 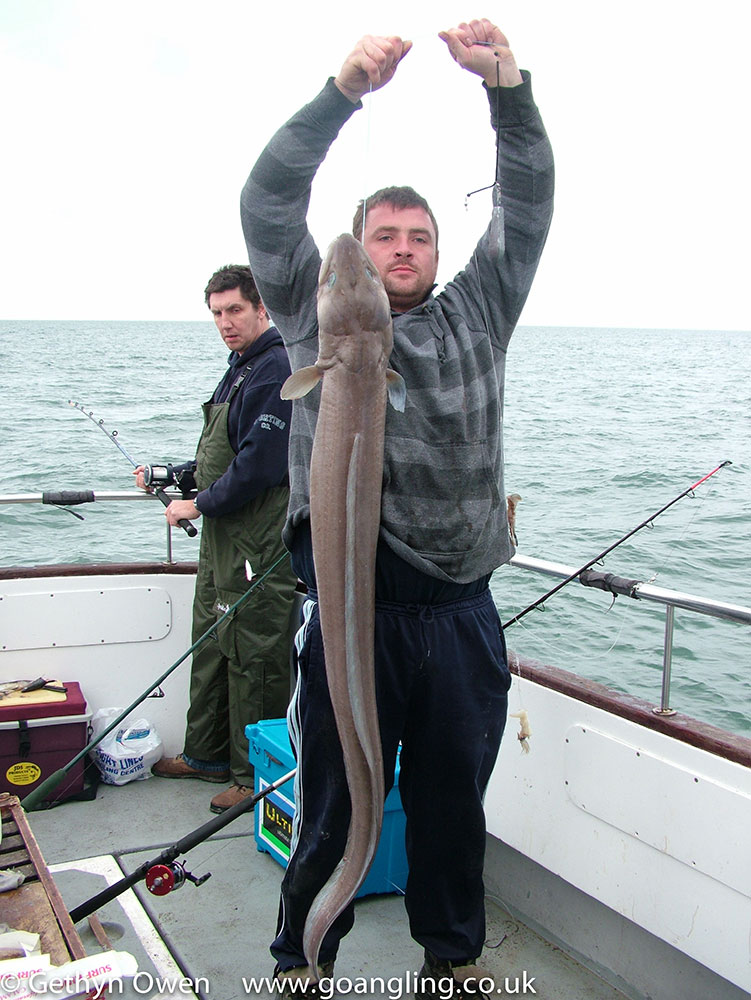 Personally I will reel down, taking in the slack line, then wait for the next distinctive movement in the line/rod tip, and then I will slowly lift the bait. At this point you may feel subtle resistance or a god almighty whack as the conger snaffles the bait and makes for home.

If hooked up, I’ll make a few quick turns on the reel, hopefully clearing the eel from the ground, allowing the eel to take as little line as possible to start with, if allowed to get to safety you can normally kiss that eel goodbye!