Even the 2013 Fladen Fishing UK Smoothhound Challenge aboard My Way couldn’t avoid the appalling weather that we have been suffering over recent months. 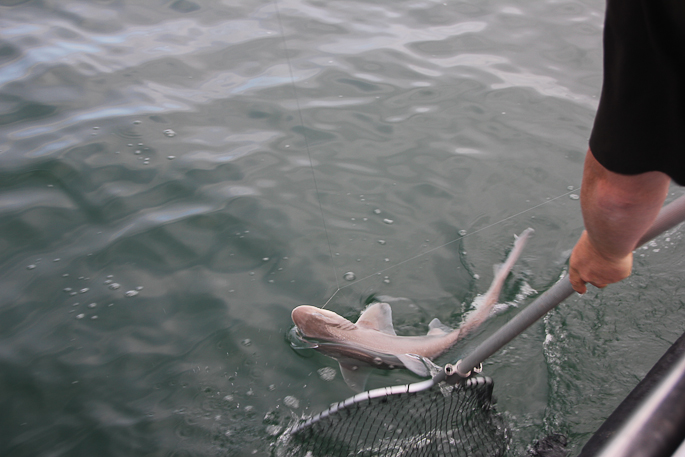 Due to be fished over 3 days – Bank Holiday Monday 27th, Tues 28th and Weds 29th May, we only managed to fish the Tuesday, with the Tuesday evening trip being called short as high winds and driving rain made an early appearance.

With smoothhounds starting to show, albeit a few weeks late, we set sail early Tuesday 28th May with a hefty slice of confidence. Aboard My Way we had good anglers, perfect crab and plenty of food, all the ingredients required for a top day hounding.

We’d only been fishing for 20minutes when David Craddock called fish on as a hard fighting hound hit his crab and stripped line off his reel. 10minutes into this tussle, Manchester angler Mark Southall cried out “I’m in” as he also lifted into another good hound. 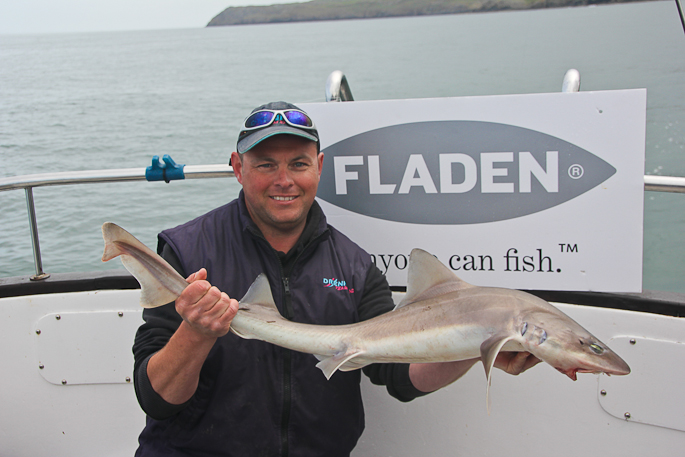 Smiles beamed all-round the boat as firstly David landed an 11lber followed shortly afterwards by Mark and his 10lb smoothie. 2 fish on within the first hour, hopes were extremely high for a cracking day smoothie fishing.

It was around 30minutes later that once again, line started to strip off Davids reel, this hound came up a few times and each time swam off quickly in the 50ft of water around our mark in Holyhead Bay.

We always eat well aboard My Way and when waiting for the hounds, there’s not an awful lot more to do other than eat.

Breakfast time was upon us and all aboard were soon tucking into some outstanding 8oz beef burgers made up fresh the day before by Martyns local butcher. 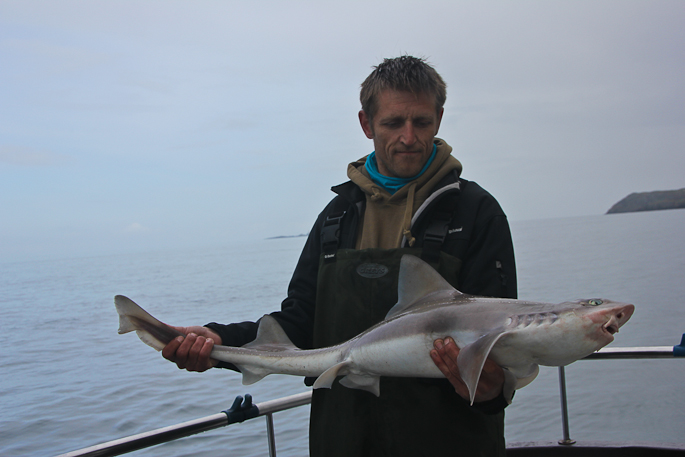 Wait as we did, another 90mins passed with no real action. With us starting to lose tide, I lifted the anchor and moved to another area that would have a reasonably good flow of water for the next hour. It’s here that Martyn decided to have a bit of fun. We’re always looking for a challenge, scaling our gear down, looking for the ultimate from the fishing in local waters. Martyn had brought along a 7gram fly rod and was determined to be the first to land a smoothie on a fly rod aboard My Way.

Lady luck was certainly watching over him as a smoothie grabbed his crab shortly after arrival, with the speed of a bullet, stripping line from the small fixed spool, the fly rod arched over with every shake of the smoothhounds head, with Martyn simply holding on and retrieving a few small metres of line when possible.

The light rod cushioned each quick dive from the hound but also made life hard for Martyn as he worked the rod and reel to tame the smoothie, tame it he did, superb fishing. 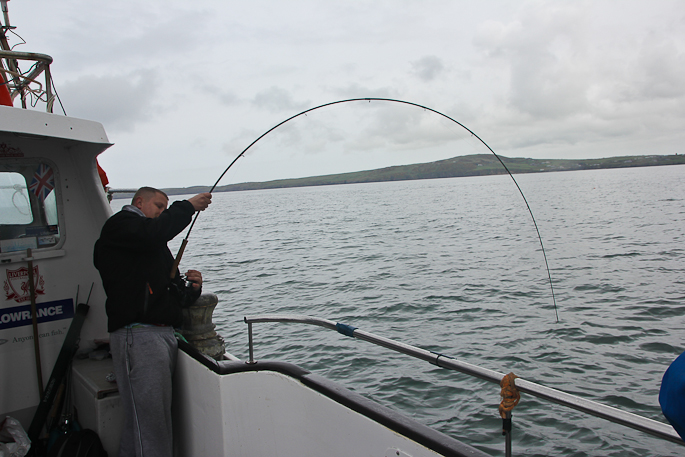 Weighing in at 9lb3oz the hound was a great piece angling for Martyn. With the tide now slackening on our second mark, we moved back inshore where the turn of tide had more water pushing through.

Fishing though was once again slow, and we only managed to land another 3 smoothies all around the 5lb in weight area. It was never the less a great day afloat, good crowd, banter and food! The hounds will have to wait until the next time.

Getting ready for our evening trip I had already cancelled the following days sail, with strong northerly winds predicted. we could however feel the weather starting to close in on us that evening.

However my crew for the evening was made up with anglers from Liverpool, Anglesey and the USA all eager to get to grips with some of the Holyhead Smoothhounds they’d read about, seen photos of and on occasions even dreamed of!

Shortly after dropping anchor on our mark the breeze started to pick up and the rain began to fall. Relentless rain, gusting northerly winds and a distinct lack of shark activity soon had everyone wanting a warm fire and hot cup of coffee.

Wendy though had other ideas, not put off too much by the Welsh weather, she managed to hook into a small hound of 6lb in weight.

This hound running around a few lines en-route to the boat, leaving a few lads desperate to claim ownership in the mealy of lines, hooks and weights. A quick unclip of the hooked snood, soon left Wendy the proud owner.

It was shortly after this point and after only a couple hours I decided to call an end to this trip early . With the sea state worsening and everyone soaked rto he bone, it was not a pleasant evening anymore! 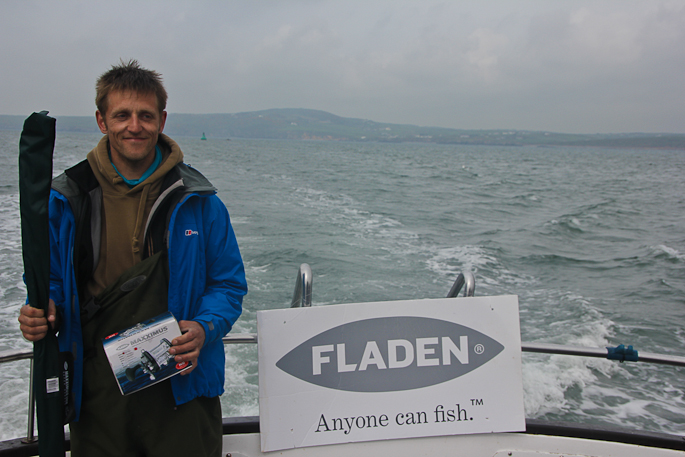 David with his IM8 Super Sensor and Maxximus reel from Fladen

With the only hound caught during our evening trip, Wendy found herself the proud owner of a IM8 Super Sensor and Maxximus reel from, Fladen Fishing UK, although not really looking to take it home, Wendy kindly donated the prize back to GO Angling and our smoothhound challenge.

This rod and reel will now go to the person who catches the heaviest smoothhound caught in June 2013, thanks Wendy. 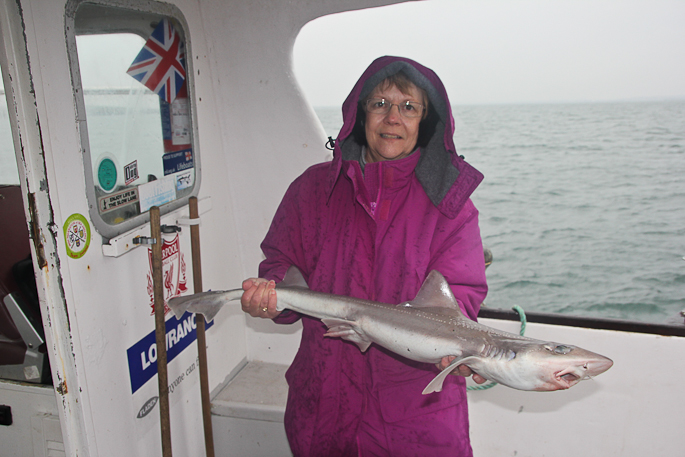 With bad weather cancelling 2 days of our 2013 Smoothie Challenge kindly supported by Fladen Fishing UK, we had another 2 rod and reel up for grabs. 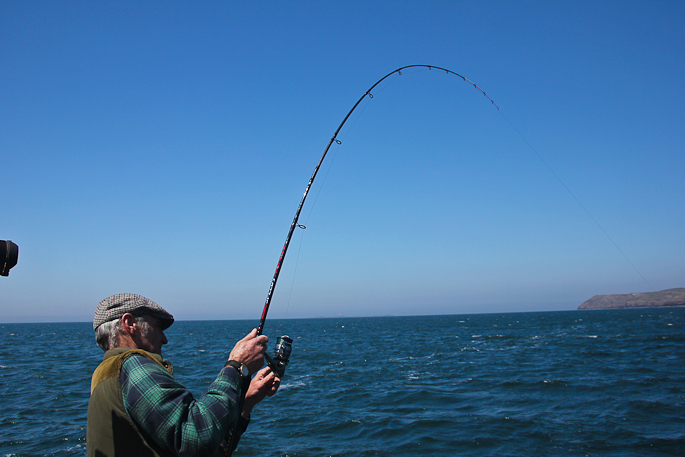 To continue with the theme of the heaviest hounds, we decided to run the comp through June.

We managed to catch a great amount of hounds, with the vast majority in the mid teen area, and we also caught 6 that went over 20lb in weight, magnificent fishing by all those involved. 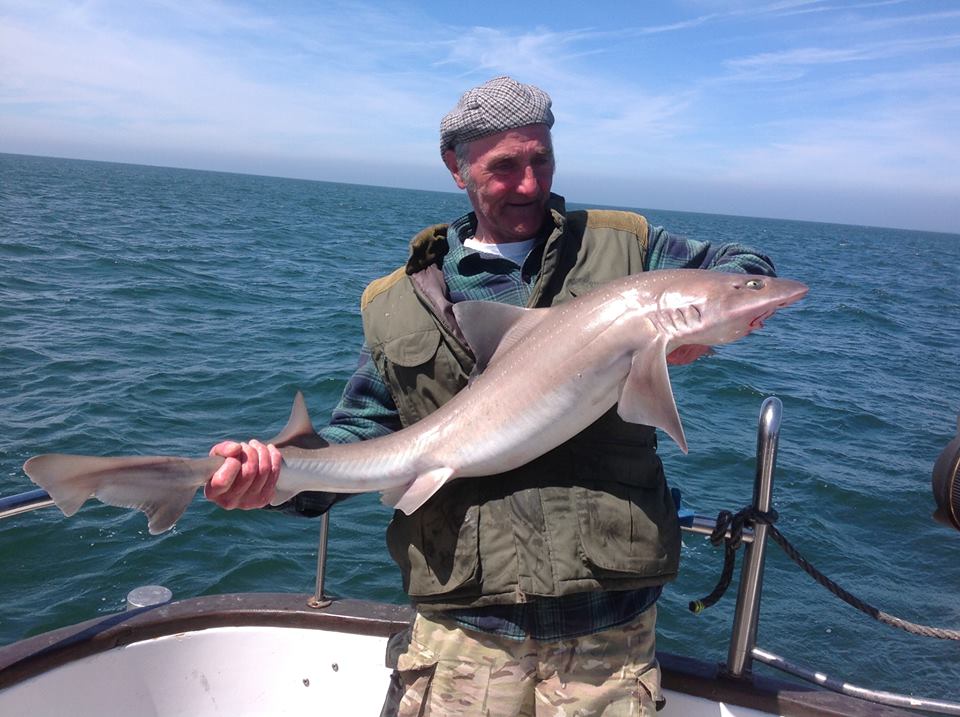 We’d only been fishing for 20minutes when David Craddock called fish on as a hard fighting hound hit his crab and stripped line off his reel. 10minutes into this tussle, Manchester angler Mark Southall cried out “I’m in” as he also lifted into another good hound.

However there can only be two winners,

Many thanks to Fladen for their support once again this year, very much appreciated.

Sadly not quite the Smoothhound Challenge we have enjoyed over the last couple years. Never the less it was enjoyed as much as we could and I would like to thank Fladen Fishing UK and the anglers once again for making it happen …. till next year! 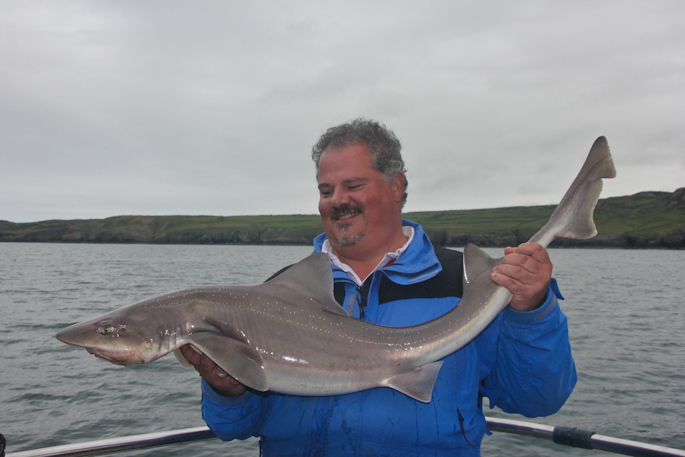