One of the largest draws that the charter fleet of north Wales has for the numerous boat anglers around the UK is a fairly consistent run of big tope. Holyhead is no exception to this rule, with the current Welsh record for a boat caught tope, 79lb, being caught and then released aboard My Way in August 2005. The fortunate angler, Anthony Meli, is pictured here with his massive catch.

It is firmly believed though that there have been bigger fish hooked by many anglers, these have proved too powerful to beat – for now!

Tope can be found all around Holyhead waters, from the deep troughs out to the west where fish have often been seen circling around on the surface, having followed the dubby trail up 200ft of water; to the more shallow 80ft mussel beds and further around the coast to areas of rough ground at Trearddur Bay.

Tope are found in a variety of different waters, from shallow gravel bottoms, to some deeper rough ground. They have sometimes been found in depths of water exceeding 400m. Tope is the most abundant large shark native to the British Isles. They generally have a light grey top and white belly area; however some tope have been caught with a dark topside.

Tope are live bearing with a normal litter size of between 6 and 30pups, usually around the 20 mark. Some of the larger females are known to give birth to up to 50 pups, the pups are 35cm at birth. Female tope do not mature until they are around 11years of age, which makes then very susceptible to any form of commercial fishing and equally susceptible to ill-handling from anglers as well. Care should always be taken when handling tope, release at the side of the boat the preferred method.

Tope are found through out the UK, with certain areas having a greater concentration than others. The fish move inshore during the spring and summer months chasing the shoals of mackerel and herring etc. They are though known to migrate winter with some large fish still taken both offshore and close in.

Fish eaters – tope eat many different fish from the obvious choices of mackerel and herring, to pouting, poor cod and a Holyhead favourite whiting. 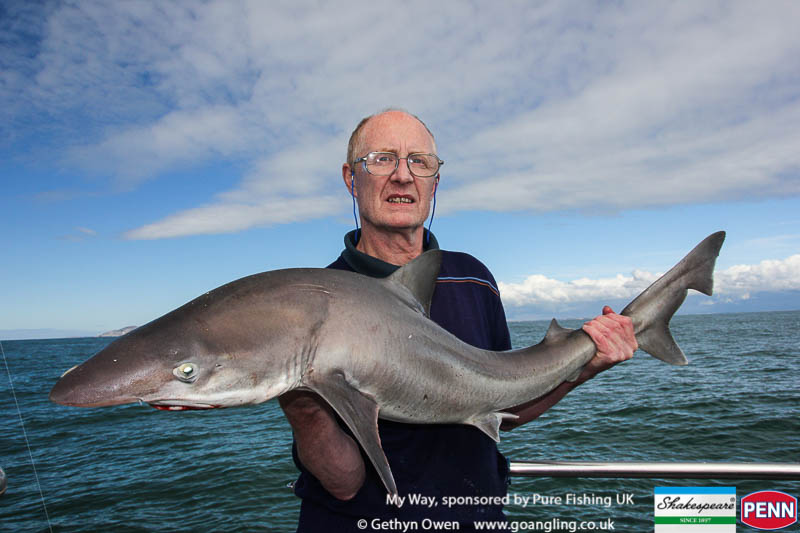 The research program UK Shark, run by Dr Ken Collins sees many charter skippers involved with the tag and release of tope. Here the skippers record various details surrounding the tope caught such as length and girth, condition and weight, these are recorded into a database by Dr Collins, thus going a long way to help us understand not only the movement of the tope, but also various other things that may help protect this majestic fish from exploitation in the future.

Small pack tope move to waters off Holyhead in early May. Fish around the 15lb mark are regularly caught from Holyhead Deep on small neap tides that allow us to anchor successfully in waters of around 200ft. By mid June the bigger fish up to 40lb are moving into both the deep water and also to marks relatively close to shore. August, Sept and Oct see the return of pack tope along with their larger family members with many 50lb+ fish brought to the boat. The 79lb shark mentioned earlier in this article was caught in only 60ft of water and only 2 miles from Holyhead breakwater.

Odd fish are also caught right up until late November, but these tend to be a product of fishing for conger and spurdog and not necessarily targeted fish.

Rods and reels vary; tope fishing can be undertaken with either a downtider or an uptider. My personal choice is an uptider in the 4 – 8oz bracket, fairly sensitive yet robust enough to help tame a wild tope. There are many different uptiders on the market to suit all pockets, and I think this is more down to your personal choice. 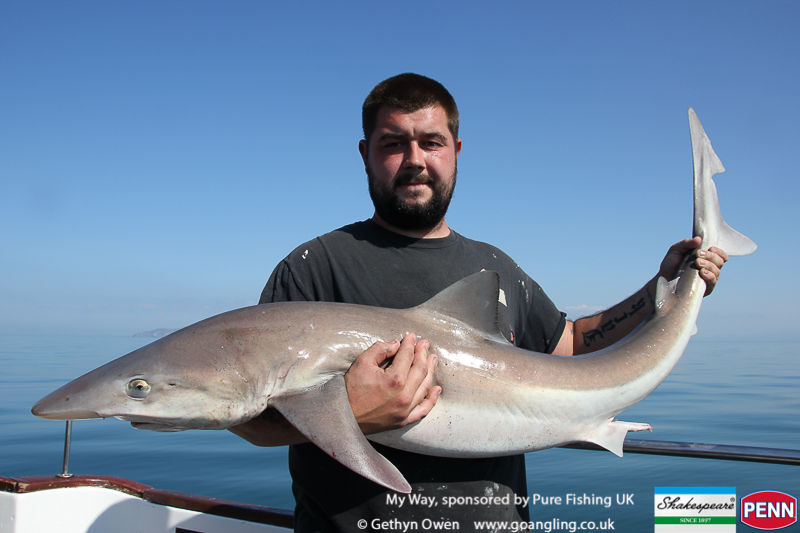 Reels as with rods, need to be robust and capable for the job. There is the old adage of buy cheap and you buy twice, and I feel this is certainly the case when it comes to reels. Naturally there are reels on the market to suit all budgets, but if your angling is to continue, and your enjoyment is paramount, it is worth taking time and browsing around for a deal to get you a good fishing reel. Reels such as the ABU Ambassadeur 7000 range or Daiwa Slo30sh are both reels I own and use regular in pursuit of many species, in particular tope, conger and spurdog.

Mainline is again a personal choice, many angler prefer to use only mono when fishing for tope, thus allowing the line to handle the sudden sharp dives as the fish makes a bid for freedom. Braid is also used, but with a good length of shockleader acting as your cushion between the tope and the braid. Failure to use a shockleader when tope fishing with braid will result in more lost than seen fish! Lines around 20 -30lb will be sufficient.

Rigs are very simple and straight forward, with no complicated pieces of tackle to clip here and there.

A basic running ledger is all you need. The trace should be around 4 – 10ft in length and made up of mono with a breaking strain between 150 and 250lb; on one end of the trace a good size 2 or bigger swivel and on the business end a hook of 6/0 – 8/0 in size. Many anglers like to use a pennel rig when fishing for tope, I don’t think there is too much of an advantage in doing this, however trialling both methods will help you decide. There are also anglers that advocate the use of wire when tope fishing, this is because of the very sharp teeth in the sharks mouth. I have found that use of adequate mono will always see the tope landed, we have never lost tope to bitten traces yet.

Tope fishing really is a waiting game. Having baited up and lowered your offering down to the bottom of the sea, it is a case of slackening the drag, clicking on the ratchet and wait. Yes, simply just wait for that click, click, click. That exhilarating noise of when a tope first picks up your bait and the darts off. It’s at this stage you fell all the adrenalin pumping round your body, and that nervous anticipation of lifting the rod and connecting with what could be a shark of 50lb or more. There are many differing views on whether you should strike into a tope whilst it is on its first run or its second, with every person you ask offering an opinion they would claim to be correct.

Tope are pack fish, it is my opinion that on the first run, the tope has picked up your bait and darted outside of the pack quickly with his dinner. Failing to do this could result in another tope taking a fancy to the offering and your fish losing its snack all together. The tope may or may not have the hook in its mouth – if you strike now – the fish could be lost all together. I personally prefer to let the fish make its initial run, then as it stops, tighten down on the line, and as soon as it moves off again lift the rod into the fish setting the hook firmly in its mouth.

There have been many reports in the press over the last 12 months regarding the possible commercial value of tope. Despite there being no current value in commercially fishing for tope, it is worrying that some individuals could be looking towards these magnificent creatures. Having fished their more traditional quarry to near extinction I suppose it was only time before thoughts were changed to something else.

A number of Sea Fishery Committees have already introduced Byelaws prohibiting the commercial fishing for tope. The North West & North Wales Committee are also looking into the introduction of a similar byelaw, however have suspended their decision pending the result of National Consultations.

Ending last October the Welsh Assembly and DEFRA launched separate consultations into the managing of tope exploitation within UK waters, however it is unclear at present when the findings will be released