In Holyhead the months of March & April signify the arrival of the big spurdogs, and then with May we have the classic period where double figure smoothies are the norm aboard My Way.

June however is the month when I consider the year really gets into full swing and offers both boat and shore anglers immense variety and certainly increased quantities of fish. 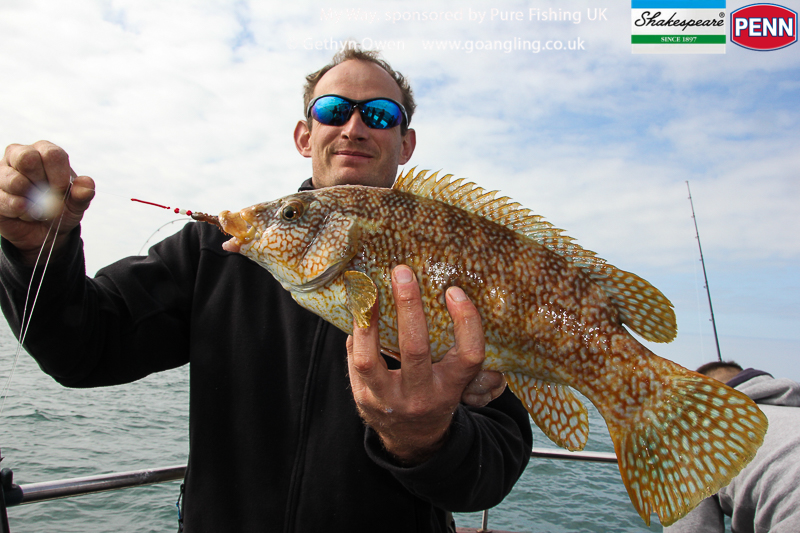 Through late spring, summer and often into late autumn Holyhead is seemingly blessed with a never ending amount of quality smoothhounds, bull huss and good rays, along with spurdogs, congers, even bigger huss and also some hard fighting tope offshore in the Holyhead Deep.

What I like more about June is that so many other fish become more abundant inshore; a true haven for the species hunters as well as those anglers wanting to try out different rigs, baits and tactics, whilst searching for species that have so far eluded them entirely or in any great number, the wrasse family a perfect example.

I spend a fair amount of time drifting around our coastline in search of pollack, coalies, codling and my favourites when drifting inshore the various members of the wrasse family. 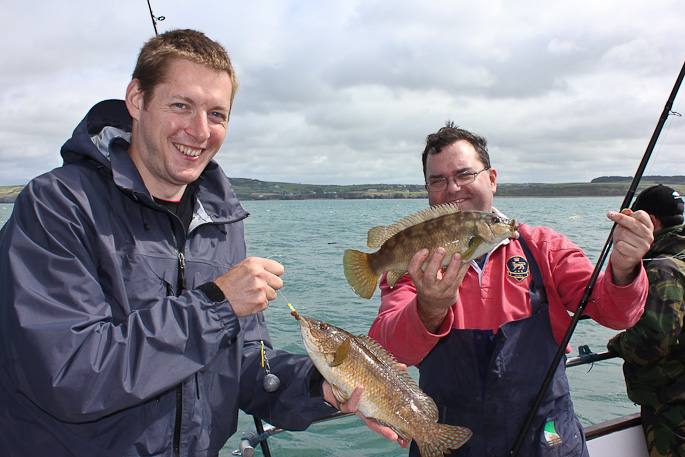 That said, wrasse are not for everyone, mainly because they don’t make for good eating and the species we have in the UK do not exceed double figures. So what do they do, well, they put up one hell of a scrap.

Most rocky areas are alive with decent wrasse and if you’re tackled up for some light fishing, you are in for an amazing fight equal, if not better than all fish of a similar size in our seas.

There are 5 main species of wrasse available from most north Wales ports – ballan, cuckoo, corkwing, goldsinney and rock cook, the latter 3 being on the mini species list as specimens do not grow in excess of 1lb in weight. It is possible to target all 5 from Holyhead with only the rock cook proving the hardest to connect with.

To get the most from wrasse fishing afloat rods have to be light, there is no compromise. With heavier and stiffer rods it is much harder to feel for the bites of the wrasse and when you do actually hook one, you get no scrap from them what so ever and simply haul them to the surface. There are far too many different makes and models of rods to choose from, best thing though, you do not have to spend a fortune – light spinning rods, 12lb class downtiders, multi-tips etc. are all perfect for the job. Aboard My Way we have various light rods for anglers to trial – The Fladen IM8 super sensor is a firm favourite, a light versatile rod with 3 inter changeable tips of varying strengths. 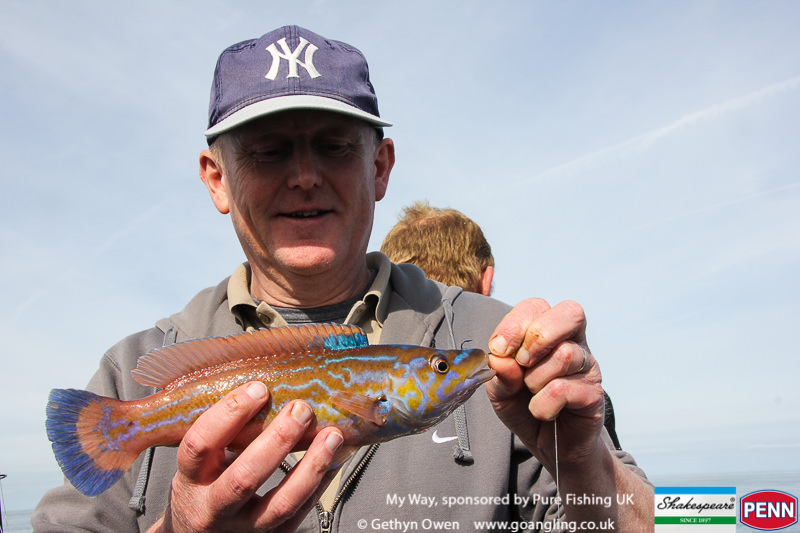 The choice of reel should be equal to the rod and then braid or mono has to be an angler’s choice. When using a sensitive rod I prefer braid. Most boat anglers are well aware of the merits of braid for many different applications; here it works extremely well by allowing you to use lighter leads and keeps you in contact with the sea bed at all times; feeling for the peaks and drops through the rocks.

When a wrasse takes your bait you have an immediate tell-tale rattle through the braid and to the tip of the rod.

What makes targeting wrasse aboard a drifting boat daunting for many anglers is the possibility of tackle loss. The vast majority of wrasse live amongst rocks and hard ground which in turn is often covered in thick weed or kelp, the kind of area that just eats tackle at an alarming rate.

With experience and certain rigs you can increase your catch rate and help reduce tackle loss to a minimum.

Rigs vary depending on the ground and the wrasse being targeted. With all my fishing in Holyhead and other ports around the UK, I have been able to adjust and refine the wrasse rigs down to 1 or 2 different types, these in turn incorporate 2 or3 different styles of attractor beads and blades etc. One of our bestselling rigs, and the style I use the most when trying to help anglers get more when drifting for wrasse is a simple 2up-1down rig, where 2 hooks fish above the lead and 1 hook fishes beneath. This rig accounts for many ballan and cuckoo wrasse through the year along with the occasional corkwing wrasse. 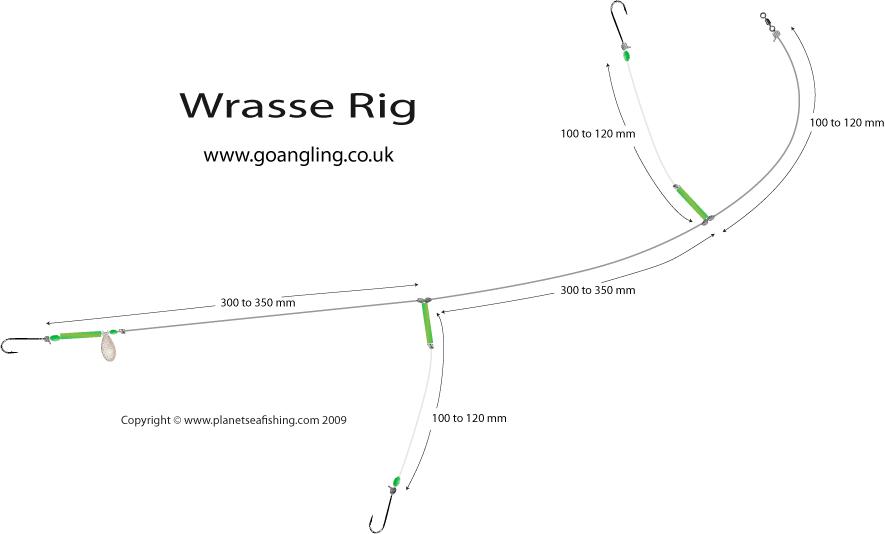 The bottom hook, a snood of around 250mm is tied onto a swivel next to the lead; this hook along with the lead are the only items in this set up that make regular contact with the sea bed, hence reducing the risk of snagging. The next hook is set around 300mm above the lead and will flutter in the tide just a short distance above the rocky sea bed. The final hook a similar distance higher again up the rig body and will often take other species such as small pollack and coalies that patrol the area just above the sea bed in search of prey.

Attractors can play a big part in wrasse fishing; part sight feeders wrasse are always on the lookout for various offerings. Depending on where you are fishing and the ground you are covering these attractors vary slightly. Over the years we’ve narrowed our attractor colourings to yellow, red and luminous or silver. Our 2up-1down rigs have 2 basic attractor bead combinations, either yellow and lumi or red and lumi. The reds tend to pick up the slightly smaller fish on more broken rough ground, with the yellow beads often deployed when we know that the wrasse are going to be 3lb plus.

When wrasse fishing for ballan and cuckoo wrasse I tend to stick with the Kamasan Aberdeen range of hooks; sizes vary between 6’s and 2’s it all depends on the particular area being fished as the size of wrasse often changes around the coast. Strong and durable, these hooks also have the ability to bend out of a snag with a little pressure and then you can gently bend them back into position when free!

Wrasse feed on a variety of things including mussel, limpet and crab, using their front teeth to crush the shells and a second set of teeth to pulverise them; however one of the most effective baits for an angler is ragworm. 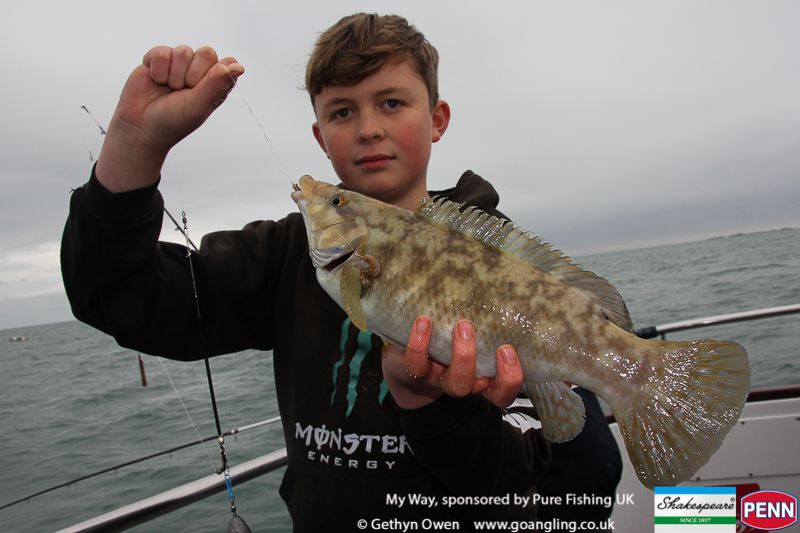 For the 2 hooks that fish nearest the bottom of the 2up-1 down rig, I tend to use ragworm in 3 cm lengths. These are threaded carefully onto the hook and up the shank, leaving only a small piece trailing.

Wrasse are delicate feeders and often just nibble at a bait as it passes by, with larger pieces of worm trailing from the hook there is a tendency for the wrasse to eat most of the worm and not take the hook. Together with an anglers eagerness to snatch at the twitching rod tip, or lift the rod at a possible snag situation, the wrasse is often lost.

Using smaller pieces of worm will not deter the wrasse, remember you are drifting and moving the baits in front of them, the fish is more likely to take the hook this time as it feeds.

The top hook can be baited with a variety of different baits, ragworm, mackerel, sandeel or squid. Whole ragworm, hooked once at the head and flows nicely in the tide a couple feet above the sea bed, as does a slither of the other baits mentioned. These regularly catch the eye of the smaller reef pollack up to 3 or 4lb in weight.

This tip was given to me by the late England International Steve Brumby, who certainly knew how to catch cuckoo wrasse in great numbers. If you’re drifting an area you are certain holds cuckoo wrasse, try tipping your ragworm with a slither of mackerel belly white.

Having tackled up and baited the rig you’re now ready to hook into some wrasse. Unless you are fishing from a big catamaran where all the anglers are on 1 side of the boat, your drift will either trail your rig away from the boat, or the boat will drift over the top of your rig. 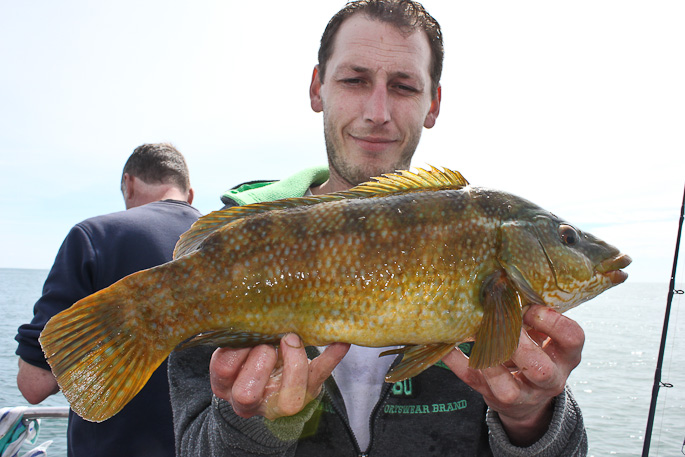 The easiest way to try and avoid this whilst trying to target more wrasse is by choosing a lead that would normally be considered a little too heavy for that particular drift.

By using this method, you are able to stay in contact with the sea bed a little easier and keep your rig & lead on a par with the drift you’re on.

Having lowered your rig to the sea bed, as the boat drifts slowly over the area, gently lift the rod up, a distance of around 150 mm and then back down again.